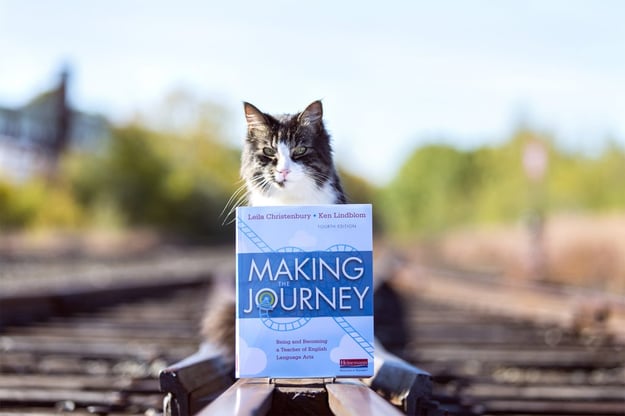 In our society we thrive on the reimagined, the reconceived, the improved, the better than ever. The ancient proverb may insist that there is nothing new under the sun, but that has never seemed to convince most of us Americans. If it’s new, most of us are in—or are at least pretty interested.

For my part, I’m a bit of a contrarian, resistant to accepting that anything, any time, any idea, any situation, is completely “different,” completely “changed,” completely “new.”

Not so fast, I usually think. There are verities, ideas that endure, human behavior that is largely consistent over time, regardless of the drumbeat of contemporary change. Here, I’m more with the French: “plus ca change, plus ca meme chose” (the more things change, the more they stay the same). Especially, I often feel, in school and with our students.

So in that vein, what in the world could be completely “new” about the fourth edition of Making the Journey (MTJ4)?  I think the verities remain, but there are also additions, emphases, aspects and foci, that readers might be pleased to see.

In particular, new to MTJ4 is a second voice, Ken Lindblom, who has been my friend and a colleague for over ten years. Creating a fourth edition was Ken’s idea, and his enthusiasm, wonderful humor, and rich background as a classroom teacher, editor of English Journal, and English ed professor have truly expanded the new book. Ken and I share a love of English and our students, but we approach topics with different strengths, different ideas, and from our different backgrounds. As we have created the fourth edition, he has been an invaluable questioner and contributor and has offered inventive ideas, his own teaching stories, and terrific expertise.

One aspect of MTJ4 that is also a bit changed is technology. In the third edition, the technology chapter was carefully crafted and, shortly after publication, quite out of date. Ugh. Advice I had given was now irrelevant as new apps and devices were entering the classroom, and the chapter itself was quickly outpaced by reality. In MTJ4 we have short, targeted Tech Talks, up-to-date suggestions for technology use and paired with specific concepts and ideas. Ken and I are less reliant on suggesting specific devices or programs and more comfortable with universal yet adaptable principles. We also infuse these Tech Talks throughout the chapters because that’s how technology really works best: as an enhancement, not as a discrete topic on its own. We think it is a far better fit.

As part of technology, we also address social media, which seems to just grow and grow, not just in volume but in import. Through Twitter and other platforms, the power of social media has moved beyond a young person’s social life to something worldwide, an instrument and opinion shaper in things as exalted as regime change, national policy, and political campaigns. This is far more than I (or, for that matter, many teachers) certainly ever anticipated, and MTJ4 addresses social media in that most powerful of contexts: students and school.

Nonfiction and informational texts are a more significant part of language arts curriculum in 2016 than previously, and most states’ English standards—as well as the Common Core standards—highlight it as such. Ken and I love nonfiction and enjoy reading and teaching it, and its presence in MTJ4 is far more direct.

Standards are all through MTJ4, especially what the Common Core and its attendant tests may dictate to students and to their teachers. We anticipated that Common Core might begin to lose some of its luster nationally—as it has—so we also discuss major features of most college and career-ready standards.  EdTPA and other assessments are also addressed.

School-to-Prison Pipeline is not a new concept although the phrase is popular. We’ve known for decades, however, that there are crucial early “markers” for student success and for student failure, that students, for example, who struggle academically in fourth grade have a higher likelihood of dropping out. In addition, students who are habitually suspended in middle school are more likely not to graduate years hence. Graduation and dropping out, however, are the mild results:  there can be a direct link between failure in school and likelihood of incarceration—and in MTJ4 we talk about a teacher’s ethical responsibility. Many of our students—and this remains a verity—are alienated in school, and while Ken and I have added some new categories (such as transgender students and those who see their sexuality as fluid), this is an enduring social justice issue for teachers, and it is an area in which they can be effective.

What hasn’t changed in MTJ4 is our celebration of the commitment of English teachers, the excitement that can occur in the classroom, and, yes, the nobility of the work. MTJ4 remains committed to that verity, and we have added, emphasized and, as always, attempted to provide good advice and some companionship on the journey. We invite you to come inside and take a read—the two of us have had a blast working together, and we hope you will like it, too.

You can Download a sample chapter of Making the Journey, Being and Becoming a Teacher of English Language Arts Here

Leila Christenbury is Commonwealth Professor of English Education at Virginia Commonwealth University and a 40-year veteran teacher both in secondary English and higher education. The recipient of both the David H. Russell and the James N. Britton awards for her research, she is a former editor of English Journal and a past president of the National Council of Teachers of English.

Ken Lindblom is Associate Professor of English and Associate Dean for Academic Programs in the School of Professional Development at Stony Brook University (SUNY), and a former high school English teacher. Ken has served as editor of English Journal and is on the Executive Board of the Conference on English Education (NCTE)