Presenting the 2019 Donald Graves Breakfast: The Antidotes to Orthodoxy
END_OF_DOCUMENT_TOKEN_TO_BE_REPLACED

Presenting the 2019 Donald Graves Breakfast: The Antidotes to Orthodoxy 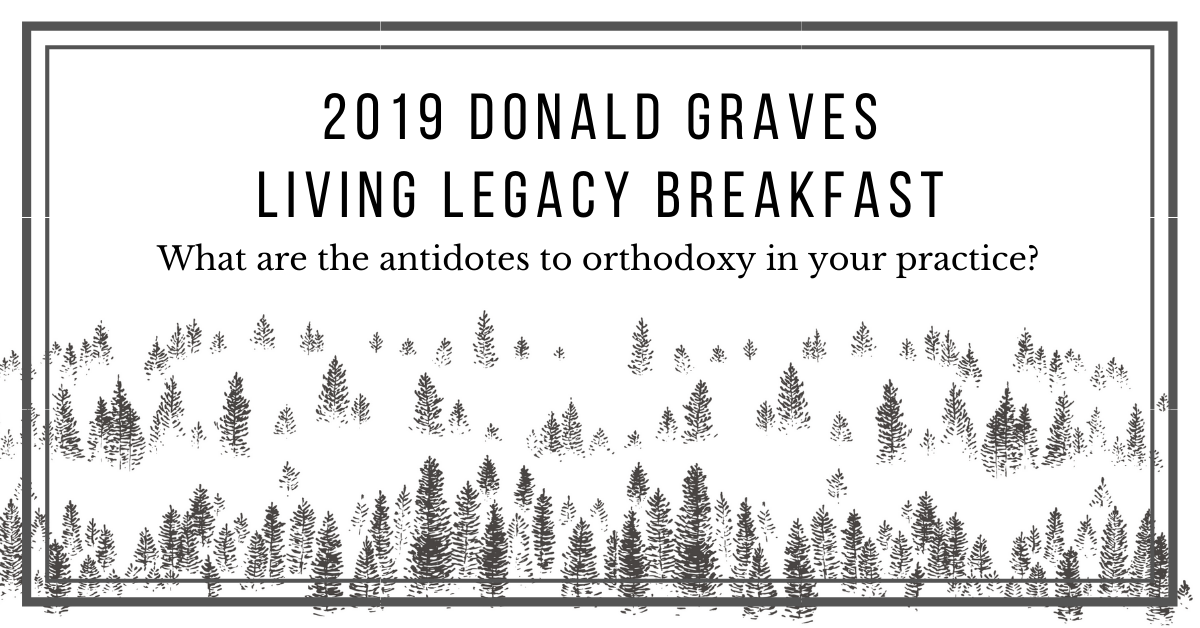 On Saturday, November 23rd at the National Council of Teachers of English conference in Baltimore, Maryland, several hundred teachers and educators gathered for the third triennial Don Graves Living Legacy Breakfast. When we gathered for the first two Don Graves Living Legacy Breakfasts, in 2013 and 2016, teachers and authors explored their convictions and honored the ways in which Don’s work helped to inform and shape their practice. Within those celebrations, we found deep purpose and power.

Our theme this year, Blessed Unrest, came from a quote by the legendary choreographer Martha Graham:

“No artist is ever pleased. There is no satisfaction whatever at any time. There is only a queer, divine dissatisfaction, a blessed unrest that keeps us marching and makes us more alive than the others.”
—Martha Graham

This idea captures the buoyant spirit and stubborn optimism that Don Graves maintained even as he named hard truths, and evokes a chapter from Children Want to Write, titled, “Reflect, Reflect, Reflect.” Here, as always, Graves invites teachers to examine and question their practice, to be aware of creeping complacency and orthodoxy, and to remain in a learning stance right alongside the children in their classrooms.

This year’s program featured hosts Tom Newkirk, Penny Kittle, Cornelius Minor, and Sara Ahmed, along with a panel of guest speakers who represent new and important voices from the field. Below, you will find video, broken into five parts, of all of the speakers from this year’s Don Graves Living Legacy Breakfast. We invite you to virtually join the festivities by viewing the videos and pondering the question:

What are the antidotes to orthodoxy in your practice?

Lorena Germán is a Dominican-American educator working with young people in Austin, Texas. She’s been an educator for more than a decade and has been published by NCTE, ASCD, EdWeek, and others. Lorena was the recipient of NCTE’s Early Career Educator of Color Leadership Award and winner of NCTE’s Latinx Caucus Excelencia in Teaching Scholarship Award. Lorena is also the Chairof NCTE’s Committee Against Racism and Bias in the Teaching of English (2018), and co-founder of The Multicultural Classroom, an organization seeking to support educators in developing a culturally sustaining approach to education.

Tiana Silvas is the winner of the 2019 Donald H. Graves Award for Excellence in the Teaching of Writing. A fifth-grade teacher at PS 59 in New York, Tiana has worked to construct her classroom framework to be inclusive, responsive, and to embody an active social justice stance. She works hand in hand with district leaders to revise hiring practices to be more inclusive. Tiana served as a Heinemann Fellow from 2016–2018.

Following Tiana’s powerful words, Penny Kittle regaled a touching story about her friendship with Don Graves, and introduced us to Andria Nacina Cole.

Andria Nacina Cole is a restorative practices specialist and writer. Her fiction has been published in Hamilton Stone Review, The Feminist Wire, Fiction Circus and Ploughshares, among others. She is the recipient of several Maryland State Arts Council awards, a Rubys Grants awardee, and Baker Artist Awards finalist. A former middle and high school teacher, Andria is co-founder and director of the critical reading and writing program A Revolutionary Summer, which exposes Black girls to Black women literary and artistic giants in an effort to push them headfirst into self-love.

And last but certainly not least, Sara Ahmed came to the stage to introduce us to Chad Everett.

Chad Everett is a former literacy coach and classroom teacher, and currently serves as a Middle School Assistant Principal in north Mississippi. A self-proclaimed literacy and technology geek, his knowledge of effective technology practices to enhance student learning, coupled with his passion for literacy, makes him a significant resource in the school districts with which he works. Chad is also deeply involved with community adult literacy, believing the change needed to transform education extends beyond the school’s walls.


“There are ways to protect against the establishment of orthodoxies. The first requires us to let children teach us about what they know.”—Don Graves

Mental Health Awareness Month is an opportunity to pause and remember the importance of good mental healt...
May 18, 2022 8:45:00 AM

Podcast: Irene Fountas, Gay Su Pinnell, and Cornelius Minor on ForwardED, From Vision to Action in Leadership and Literacy

Today on the podcast we have an excerpt from our new ForwardED slow conference series. Today’s conversati...
Oct 7, 2021 3:45:00 AM