The Teacher You Want to Be: Sir Ken Robinson on Centering the Child, Part 2
END_OF_DOCUMENT_TOKEN_TO_BE_REPLACED

The Teacher You Want to Be: Sir Ken Robinson on Centering the Child, Part 2 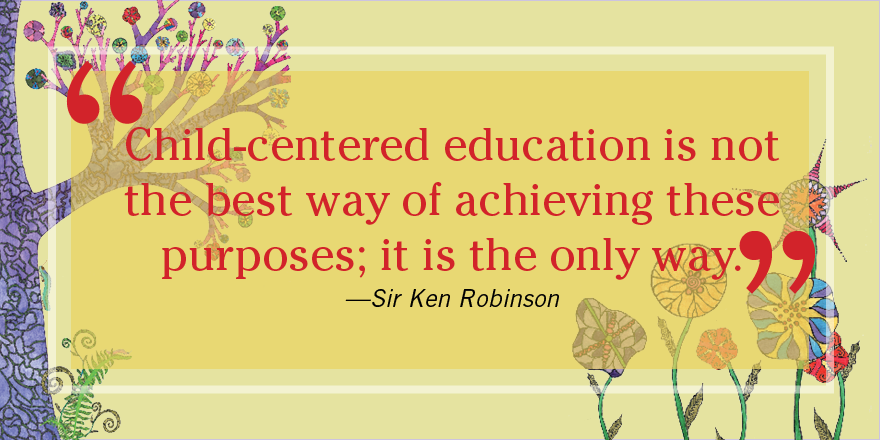 [dropcap]Like[/dropcap] you, children are not born into one world: they are born into two. There is the world around them: the world of other people and things that exists whether or not they do as individuals. This world was there before they came into it and it will be there when they are gone. There is also the world within them: the internal world of their own consciousness, which came into being when they did and exists only because they do. As human beings, we know the outer world only through our inner worlds. We perceive it through our physical senses and we conceive it through the ideas, feelings, and values that constitute our worldview. If education is to fulfill the principles of a liberal democracy, it has to help children understand both of these worlds and how deeply they affect each other. In doing so, it should draw on the best of both traditional and progressive approaches.

At their extremes, traditional methods of education are focused almost entirely on the outer world and pay too little attention to the child’s inner world. By valuing only academic abilities, they can marginalize other forms of knowing and understanding (musical, kinesthetic, athletic, poetic, visual, practical, and the rest) and the corresponding interests and talents of children themselves. They can marginalize young people’s need to express their own feelings and to work creatively with other people.

In their extreme versions, progressive methods can be focused almost entirely on the children’s inner worlds and pay too little attention to their need to engage constructively with the world around them. By mainly valuing the child’s own ideas and feelings, they can undervalue the importance of learning from others, of studying received knowledge and practices, of developing discipline in thought and expression, and of empathy and self-control in relationships with others.

Although children are natural-born learners, many now leave education early and before they graduate. The main reasons are boredom and disengagement. Many young people are victims or perpetrators of bullying and aggression. Many suffer from and some succumb to depression in school and even suicide. All of these problems are exacerbated by, and sometimes originate in, a culture of schooling that ignores their inner lives: in education that is not child centered.

The Teacher You Want To Be: Essays About Children, Learning, and Teaching, edited by Matt Glover and Ellin Oliver Keene, will release October 22nd.