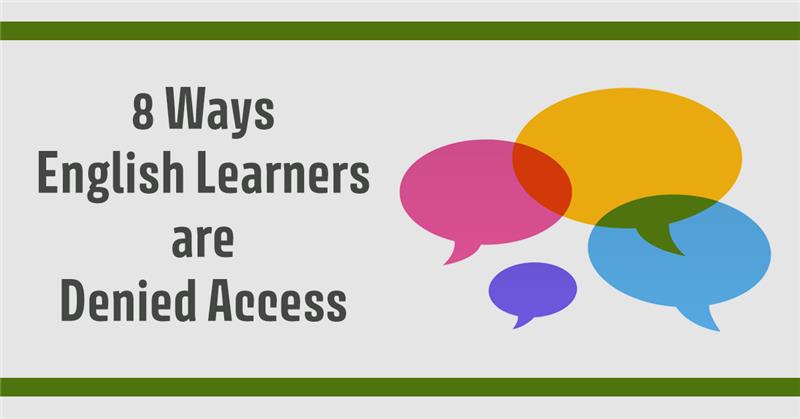 Because of this, English Learners are (often unintentionally) denied access to education.

Ms. Samuels’ school recently saw an increase in ELs, which meant that for the first time, she was teaching students who had recently met the criteria to exit their EL program. Because these students still did not have the same level of language skills as their native English-speaking peers, she believed they did not belong in her mainstream classroom. She set up a meeting with her administrator to request that the students be transferred back to an EL class—where they would not have access to content instruction—until they reached the same level of language proficiency as their native English-speaking peers.

With no prior experience speaking English, seventh grader Daniela arrived at Cunningham Middle School and impressed her teachers by using English within only a few months. Daniela’s teachers were pleased and surprised by her enthusiasm for speaking English, even when she was around speakers of her native language.

Within a year, Daniela was comfortable socializing in English. But after three years, her teachers questioned her effort. Daniela still struggled with the academic English required for school. Her teachers were convinced this was happening because Daniela had stopped applying herself.

Science teacher Ms. Angelo was concerned that Marquis, an EL, did not talk in class and had difficulty writing. When one of her colleagues asked how much scaffolding and explicit language instruction she had provided, Ms. Angelo responded, “I am a science teacher, not a language teacher. I have a lot of science content to cover and do not have the time to teach language.”

… Ignore the Progression of Language Development

Ms. Carey was concerned with the spelling errors of second grader Lucila. On two pages of math word problems, Ms. Carey circled each of Lucila’s spelling errors and made her rewrite all of her responses. The word problems were solved correctly and the misspelled words were comprehensible (and developmentally appropriate for her age and stage of language development). Lucila’s teacher wanted the best for her—to spell correctly—but was misguided in focusing Lucila’s attention away from the math content. In fear of spelling errors, Lucila wrote shorter responses and thought less deeply about the math concepts. She began to dislike math.

…Ignore the Need to Learn About and Affirm Student Identity

At Marshall High School, the teachers and administrators do not share the cultural and linguistic backgrounds of most of their students, many of whom are recent immigrants. In the annual school survey (required by the state’s Department of Education), students and their families said they did not feel welcome or understood by the teachers and administrators. Faculty were surprised and frustrated by this feedback and responded with comments like, “How are we expected to understand the cultures of all of our students, they come from so many different places?” and “Our job is to teach them, not to get to know them.”

A middle school teaching team decided to improve the English proficiency of their ELs by committing to an English-only policy in their classrooms. One teacher planned to post a sign with a construction symbol that says, “This is an English-only zone.” Another would keep a penalty jar and collect money when a language other than English was spoken or written. Another teacher assigned students the rotating role of “language police.”

Ms. Sanchez could not tell whether EL student Katy’s academic struggle was due to a disability or language. She thought it best to err on the side of caution and decided to refer Katy for a special education evaluation. Katy was given an individualized education program (IEP). Katy’s subsequent teachers struggled with knowing whether Katy’s difficulty was language or disability and Katy received excessive scaffolding minimizing learning. Four years later, when Katy be- came proficient in English, her IEP was terminated.

José, a seventh grader who had been in the English as a second language (ESL) program since kindergarten, approached me, his ESL teacher, to wonder whether he had a disability and asked how he might get special education services if he needed them. José was completely orally proficient using social language in English, but experienced significant difficulties grasping academic concepts.

In No More Low Expectations for English Learners, part of the "Not This, But That" Series, authors Jana Echevvaria and Julie Nora argue that teachers’ attitudes affect student achievement. They share best practice methods for supporting English Learners and offer

Julie Nora is Director of the International Charter School (ICS) in Pawtucket, Rhode Island. Prior to leading ICS, Julie worked as a teacher of ESOL (English to Speakers of Other Languages) in K-12 settings and as an applied researcher at the Education Alliance at Brown University.

Jana Echevarria, Ph.D., is Professor Emerita at California State University, Long Beach where she was selected as Outstanding Professor in 2005. She has taught in elementary and secondary in special education, ESL, and bilingual programs.

Topics: Education, ESL, Not This But That, Jana Echevarria, Julie Nora, No More Low Expectations For English Learners