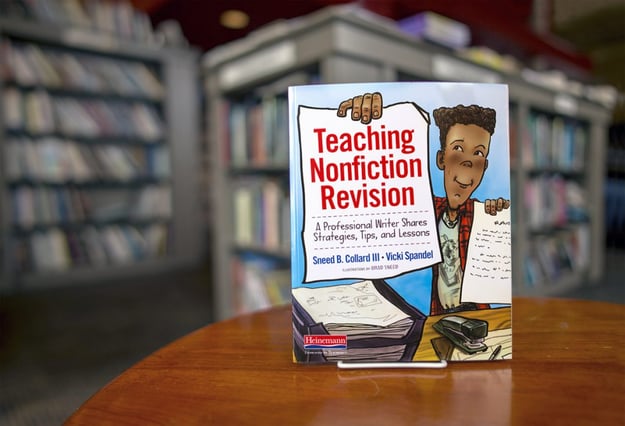 Adapted from Teaching Nonfiction Revision: A Professional Writer Shares Strategies, Tips, and Lessons by Sneed B. Collard and Vicki Spandel

Have you ever watched a film that you enjoyed, but afterward had trouble describing— or, worse yet, never thought about again? Unfortunately, many Hollywood movies fall into this category.

They seem well-constructed and crackle with gee-whiz action, yet leave the audience empty and disappointed. Most often, the problem boils down to one issue: there’s no person or thing in the movie that we actually care about. Instead of being character driven, these movies are plot-driven. They are defined by events instead of characters that we actually identify with.

Character-driven movies and books are almost always more engaging than their plot driven counterparts. Even if you’re an action movie fan, it’s almost guaranteed that you will enjoy an action film with complex, well-rounded characters more than one populated by cardboard stereotypes. This is as true for nonfiction as it is for fiction. The next time you’re in a bookstore, take a look at the nonfiction shelves. You’ll see that most of the best-selling books are biographies or memoirs. That’s no accident. People love reading about other peoples’ lives. We want to learn about their passions and experiences. Mostly, we want to learn about their struggles and how they did or didn’t overcome them.

That doesn’t mean that all nonfiction manuscripts have to be about people. Characters can be almost anything—places, events, buildings, animals. And a writer doesn’t have to stick to just one character. Most nonfiction books switch between a number of different characters to tell a story.

In order to hold readers’ attentions, therefore, writers have to make sure characters engage readers right off the bat. Following are some strategies writers use to make readers care about our nonfiction characters.

As a way of reviewing these five strategies, see if students can identify which of the five—and there could be more than one—each of the following authors is using:

After reviewing these five strategies, have students go through their own drafts, choosing one character to focus on, then asking, “How can I make readers care more about this character?” Give them time to revise, using one or more of Sneed’s five strategies.

One of today’s favorite nonfiction children’s authors, Sneed B. Collard III has written more than 80  books, ranging from captivating picture books to middle-grade novels to award-winning science books. He is the 2006 recipient of the Washington Post Children’s Book Guild Nonfiction Award for his body of work. To learn more about Sneed, his books, and speaking activities, visit www.sneedbcollardiii.com.

Vicki Spandel has spent her professional life working with students and teachers of writing—as a classroom instructor, online writing coach, journalist, editor, technical writer, and curriculum developer. She is the author of multiple books on writing, including Creating Writers, Creating Young Writers, and The 9 Rights of Every Writer. Visit Vicki online at http://sixtraitgurus.wordpress.com to see writing lessons based on contemporary literature.