Why Bring Stories Into The Science Classroom?
END_OF_DOCUMENT_TOKEN_TO_BE_REPLACED

Why Bring Stories Into The Science Classroom? 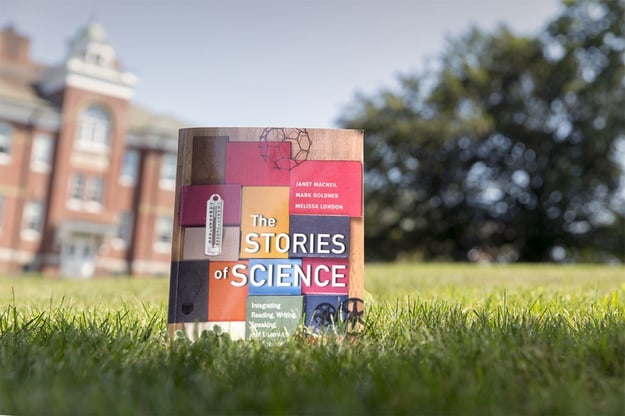 The following is adapted from The Stories of Science: Integrating Reading, Writing, Speaking, and LIstening into Science Instruction by Janet MasNeil, Mark Goldner, and Melissa London

Throughout human history, we have told stories to educate, entertain, and inspire others. The art of telling the stories of science is not that different. However, some people may balk at the idea of telling stories in science—after all, stories are fictional, right? Not really. As Anne E. Greene says in Writing Science in Plain English:

Many scientists see little connection between communicating their science and telling stories. They think of stories as made-up, while science is based on fact. However, to most writers, “story” simply describes a powerful way to communicate information to an audience. Recent research has shown that our brains are wired to recognize stories with a particular structure, one that features characters and their actions, and information presented this way becomes compelling and memorable. Scientists can use these same elements of stories—characters and actions—to write about the real world with the same desirable results. Writing stories about science doesn’t mean making it up or dumbing it down. Rather, we can hang complex ideas on the scaffolding of good, simple stories and make our science as exciting to our audience as it is to us. (2013, 12)

Scientists tell stories for many reasons: to explain phenomena, teach and share information, and learn from the tales of other scientists and their discoveries. Stories may also be designed to persuade or build excitement about science. In the process of telling stories, scientists make a strong connection to the audience by sharing their curiosity, enthusiasm, and personal ideas— essentially sharing a part of themselves along with the science. Imagine what will happen when we strategically weave these authentic science stories into science teaching and learning! Just mention the word story to your students. Right away you’ll have their attention. In addition to grabbing students’ interest and curiosity, telling the stories of science in class and teaching students to compose their own stories will give them the big-picture context of the content they are learning and empower them to be effective communicators. Most importantly, you’ll be modeling and teaching the authentic use of stories in science and making the stories relevant to them and their lives.

Story is also an effective way that people organize and store information. In fact, we remember information that is embedded in a story much more effectively than information that is shared in lists or lectures without the context of a story. Researchers have found that when science content is embedded in a story that allows middle school students to “vicariously experience the scientific journey of discovery,” students have a deeper understanding of the content and retain the scientific concepts longer (Arya and Maul 2012, 1030). In this study, researchers asked one group of students to read scientific information in a narrative (story) form that included the aspect of scientific discovery and asked another group to read the same information presented in a more traditional textbook fashion. The researchers measured student comprehension and recall for the information in the text immediately after students read it and again one week later. The data suggest that student understanding and recall was significantly better for the group that read the story versions. These findings indicate that weaving the element of story into our teaching will increase not only student engagement but their understanding as well. In addition, stories build personal connections to the content, scientists, other students, and the audience. As a result, when students incorporate story into all the ways that they communicate about their work as scientists, their connection to their audiences will be much more compelling.

To learn more about The Stories of Science: Integrating Reading, Writing, Speaking and Listening into Science Instruction, and to download a sample chapter, visit Heinemann.com.

Janet MacNeil is the coauthor of The Stories of Science: Integrating Reading, Writing, Speaking and Listening into Science Instruction. She has extensive experience developing science and engineering curriculum, as well as providing hands-on professional learning for teachers. Her focus is getting teachers and students excited about science and literacy.

Mark Goldner is the coauthor of The Stories of Science: Integrating Reading, Writing, Speaking and Listening into Science Instruction. He has taught project-based middle and high school science for more than 25 years, with a focus on integrating science and literacy. He has a special interest in bringing polar and climate research into the classroom.

Melissa London is the coauthor of The Stories of Science: Integrating Reading, Writing, Speaking and Listening into Science Instruction. She has more than 20 years of experience as a classroom teacher, where she leverages her love of language and science to engage all learners with high-interest, high-impact lessons.