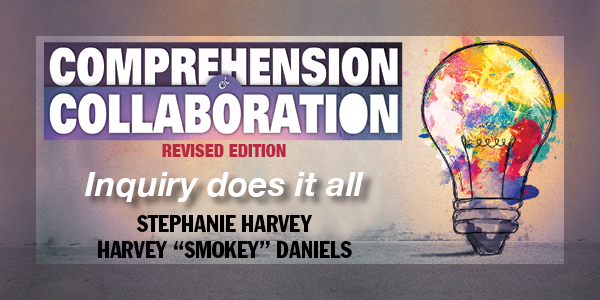 What could school shootings, stories of bullying, and the increasing emotional isolation of students from one another have to do with inquiry? A lot, as it turns out. Inquiry won’t prevent any of it by itself, of course, but it can play a positive role as part of any school’s focus on reducing violence and creating community.

Stephanie Harvey and Harvey “Smokey” Daniels have worked intensively with teachers in 27 states in the last five years. They see and hear about school violence frequently. But they also have seen how their inquiry circles model can help. In the preface of their forthcoming revised edition of Comprehension & Collaboration, they explain how inquiry circles support social-emotional learning:

WE HAVE BECOME STARKLY AWARE of the fact that in many schools, the kids don’t get along with each other, don’t work together, and aren’t friendly and supportive. This is not a defect of the students, but a failure of schools to address these often-obvious issues. When these kids leave school, they can’t succeed at many jobs because they simply can’t get along with anyone else. They have failed socially to achieve college and career readiness, and they have not acquired a full toolkit of twenty-first-century skills. Schools, scrambling to control this disharmony, began suspending and expelling students often in racially discriminatory patterns, pushing many teens into the ever-accelerating school to prison pipeline. The benefit of this school climate panic was the reminder, whether from Maslow’s hierarchy of needs (1943) or from simple common sense, that people cannot learn when they do not feel safe, and too many American students feel unsafe in and around their schools every day.

The good news was that social skills could be taught to kids of all ages. Joseph Durlak and colleagues released a study in 2011 that was a stunner. Their K–12 meta-analysis of 217 studies on general social skills training (not just anti-bullying projects) showed that kids who are directly taught how to be peaceful, friendly, and supportive in the classroom not only avoided much conflict, but also saw 11 percent gains in course grades and standardized test scores.

Staggering, right? When we first came across this 11 percent number, we figured it must be a typo for 1.1 percent, but we soon confirmed that it was a real, true 11 percent increase in achievement. No typo…wow!

In the wake of these and other findings, many new resources are still being developed. The Center for the Assessment of Social Emotional Learning in Chicago began rating the bewildering array of new “SEL” programs being offered by publishers. The USDOE created an umbrella program called Positive Behavior Supports and Interventions. They pushed school districts to develop detailed plans for teaching social skills, and keep previously suspended kids in school, so they could continue learning. Ultimately, we believe deeply in teaching kids the social skills they need to succeed in school. We must also reiterate that one big factor in improving school climate is making school interesting, active, and engaging—something that inquiry-circles learning inherently does. 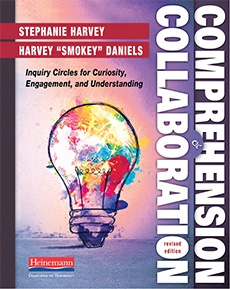 Stephanie Harvey has spent her career teaching and learning about reading and writing. Harvey "Smokey" Daniels has been a city and suburban classroom teacher and a college professor, and now works as a national consultant and author on literacy education.

Click here to view our official page for Comprehension and Collaboration, Revised Edition