On the Podcast: No More Telling as Teaching with Cris Tovani
END_OF_DOCUMENT_TOKEN_TO_BE_REPLACED

On the Podcast: No More Telling as Teaching with Cris Tovani 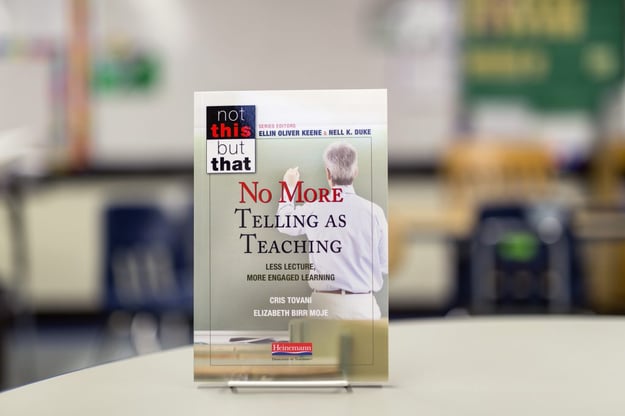 No More Telling as Teaching[/caption]When we rely on lecture to cover more content, we’re doing students a disservice.  Although lecture can be engaging and even useful, lecture alone cannot give students real opportunities to learn, retain, and transfer the ideas, skills, and practices we’re trying to teach.

Authors Cris Tovani and Elizabeth Moje help us translate the time spent lecturing into powerful learning experiences where students interact and inquire into topics that matter. They write more about this in their book Not This But That: No More Telling as Teaching: Less Lecture, More Engaged Learning. We sat down with co-author Cris Tovani to talk more about why lecture is being overused.

See below for a full transcript of our conversation:

Cris: Well, I think teachers are working really hard to fit in everything that they're being asked to do. There's so much content to cover, and more content than time to do it. Lecturing's very efficient. Teachers work really hard to create engaging PowerPoints. I think there's this sense that if we wear ourselves out, we've done our job. I think there's the satisfaction that we've done our best if we've covered the content, but we know deep down that there's kids that are disengaging. I think it's just teachers' attempt to try to do what's asked of them, but also make sure that kids are trying to stay engaged. It's a way to get through all the material that they're being asked to teach.

Brett:    You write that we need to be more aware of emotional and cognitive engagement. What do you mean by this?

Cris:    Well, I think so often there's emphasis on behavioral engagements, you know, rules of the classroom and the way you have to act. I learned when I first started teaching high school that kids could play this game of school, and just having rules posted on the wall didn't ensure that they were learning. When I started working with struggling readers, they often didn't play the game. When I had an opportunity to teach kids who were grade-driven, they would be very compliant and they would do what I would ask, but I noticed that that didn't always ensure the kids were getting smarter. The cognitive and emotional engagement I think gives teachers a way to really see what kids care about, when they're engaged, when they're disengaging, whereas behavioral engagement alone is just low-hanging fruit. It looks like kids are doing what they're supposed to, but not necessarily really learning. I think thinking about all three of those types engagement is really important because it pulls in different kids for different reasons.

Brett:    Sometimes a student, they want to quit. They get stuck. How can we help them avoid this?

Cris:    Yeah. I think a lot of times kids quit because they don't really know what we want from them. I think they're trying to read out minds sometimes or guess what we want. The more we can give them models, models of our thinking, models of products, and they don't always have to be perfect models. Lot of times I'll just show a first draft of my writing to show how crumby it is, and then I'll maybe share some writing from a published author from the newspaper, but I think models of what we want and where they're headed. I think really clear learning targets too, kind of breaking down some of the components of what we want them to be able to do, because if we have targets, then we can give them really specific feedback. Then I think they need opportunities to revise and redo, and that goes back to that lack of time. I've really tried to start planning revisions into my units of study, opportunities for them to rewrite papers or redo projects after they've gotten some feedback.

Brett:    When talking about the need to model more, you write, "Sometimes I think I've been very clear about what I want students to do, when in truth, I haven't." You've talked about modeling. What do you do in those moments?

Cris:    Yeah. I think having those weak and strong models and giving kids opportunities to kind of compare their work to each of those models. I think having those targets again of, "Here's what I want you to know and be able to do," and then feedback towards those targets, as opposed to just "awkward sentence" on there. This idea of specific feedback as a model, "Here's what it looks like when you do hit the target. Here's what it looks like when you don't hit the target," I think is more than just me modeling a mini lesson because at that point, I just can't tell who's getting it and who's not getting it. I have to give them opportunity to create something, and then they need that opportunity to compare it to wherever it is we're heading.

Brett:    How has problem-based learning changed your own teaching?

Cris:    Well, I think it's made me more aware of how to help kids who are struggling. I give a lot of credit to Sam Bennett, who's my instructional coach, who's really pushed me to think about getting more kids engaged. I was really good at getting kids emotionally engaged. I can get kids to do stuff for me because they liked me and I would make them feel good, but there were always a couple kids every year that I just didn't hit. I think it was because I didn't have a juicy enough cognitive engagement piece. We weren't working on something that had an authentic audience. When I started using problem-based learning, that was one of the very first things that I had to think about was, "What were kids going to make that exists in the world?" and then, "Who would they share it with?" It kind of took some of that fakey-fake out of it, and allowed me to really focus on social issues, or current events, or something in their community that they really needed to do authentic work, like real work. I think that's where that problem-based learning came, as it gave kids a chance to really do something relevant, as opposed to just working towards the standards.

Brett:    Yeah. How can teachers who are unfamiliar with problem-based learning, how can the get started with that?

Cris:    Well, I think becoming aware of what's current in the community, this place-based learning that Elizabeth Moje talks about in our book together. What are some issues in the community? What are some current issues happening in the news? I think that's a place to start thinking about those themes and how those themes can be connected to whatever literature that they want to use, or whatever nonfiction that they want to use. But I think the single biggest factor where I would start that really helped me was thinking about, "Who could they share this work with other than me?" Because my kids know that I love them and care about them, so even if they produce crumby work the stakes aren't that high. But if they have to share it with a panel, if they have to display their work in a public place, if they have to talk to other experts in the community, I think it ramps up that urgency. I think thinking about an authentic audience and the product that kids are going to create at the end might be a great starting place for teachers.
I also think it's important for teachers to ask themselves why what they're teaching matters, like what are the big ideas behind it? Is it just some stupid thing like commas in a series, or is it ... Using punctuation correctly is really important because it helps convey tone and mood. I think that identifying what's compelling and why the learning matters is another thing that teachers can think about as they plan their units.

Brett:    What would you say are the big payoffs for students when teachers use problem-based learning?

Cris:    Well, I think teachers get a lot of satisfaction when kids are engaged. I mean, you're still tired. When you lecture, you're working hard and you're tired. When you're using problem-based learning, you're still tired, but it's a good tired because you're not lying awake in bed at night thinking about the kids who were not doing anything or the kids who were off-task. I think it's very energizing when you're seeing more kids doing more of the work, as opposed to you standing in front of the class flailing your arms trying to get peoples' attention.

Brett:    When you're using a problem-based learning approach, what are the implications for the text you use?

Cris:    Well, I think it's important that you provide choice, but I also think it's important that you have an anchor piece that you can model thinking with. Sometimes that anchor piece is a novel, and then I'm bringing in nonfiction text and choices that kids can use to build their background knowledge, or they can use the nonfiction text to look at as models or mentor text. But I think that idea, especially for language arts or English teachers, we've got to give kids opportunities to not only learn how to read complex literature, but also how to look at primary documents, how to look at graphs and tables, and that whole visual literacy piece that is just everywhere. That idea of thinking about, "What's a theme that I want to pull out," and then, "Where does that text exist in the world that will connect to that theme?" Sometimes it's newspaper. Sometimes it's blogs. Sometimes it's historical text. Sometimes it's primary documents, but I think just pulling in choice around the nonfiction that kids get to read, if you're using a single piece or literature, is really important.

Recipient of ILA's Adolescent Literacy Thought Leader Award in 2017, Cris Tovani is a veteran teacher, staff developer, and nationally known consultant on issues of reading, content comprehension and assessment in secondary classrooms. She is the author of  I Read It But I Don’t Get It, Do I Really Have to Teach Reading? and So, What do They Really Know?

Cris Tovani is coauthor with Samantha Bennett of the Heinemann Digital Campus course Adolescent Reading RX, which shows a variety of ways to reach reluctant and struggling readers.

We talked with Cris during the 2017 International Literacy Association conference. Shortly after our conversation, Cris, was the recipient of the ILA Adolescent Literacy Thought Leader Award. Our congratulations to her on that recognition.

Click here to learn more about Cris and Elizabeth’s book in the Not This But That series: No More Teaching as Telling.

At the International Literacy Association annual conference this past weekend, author, veteran teacher, s...
Jul 21, 2017 4:46:50 AM

What Does the Research Say about Lecture-Only Teaching?

Adapted from No More Telling as Teaching: Less Lecture, More Engaged Learning by Cris Tovani and Elizabet...
Jun 8, 2017 4:17:05 AM