Does Your Writing Assessment Help Writers or Pac-Mans?
END_OF_DOCUMENT_TOKEN_TO_BE_REPLACED

Does Your Writing Assessment Help Writers or Pac-Mans? 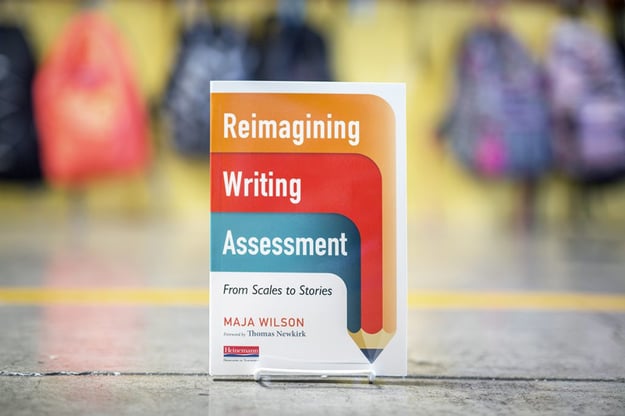 The following is adapted from Reimaging Writing Assessment: From Scales to Stories by Maja Wilson.

I was mostly disinterested in the Atari that my brother got for Christmas in the late 1970s; the excruciatingly slow back-and-forth of Pong bored me. But when Pac-Man was released in 1982, I was intrigued; fleeing a ghost made sense to me. Still, I was confused by Pac-Man’s motivation when it came all to those wafers. One after another, screen after screen, he just kept gobbling them up.

“Why is Pac-Man always so hungry?” I asked my brother while awaiting my turn at the joystick.

His explanation was offered with an exasperated eye roll, “He isn’t hungry. You get a point for each one.”

Students write for the same reason that Pac-Man munches: to accumulate points as they gobble their way through one grade-level screen of wafer-sized learning target after another. But writers are people, not Pac-Mans. We don’t write to hit learning targets, or bask in the “whakka” sound of a successfully eaten wafer, or to avoid the weird warble of death by ghost. Instead, we write because we’re human, and writing is a way of seeing and feeling and hearing, a way of asking and knowing, a way of creating and making sense, of expressing and communicating. If and when we need feedback from another human being, it’s to know something of what she experiences when she reads what we write.

To grow as a writer, then, is to grow as a person who uses the written word to see, feel, hear, ask, know, create, make sense, express, and communicate. If assessment misses these fundamental human purposes for writing, it cannot capture a writer’s growth, much less support it. Assessment for growth must first recognize that writers are human beings who express and develop their intentions by making decisions about language for an audience of self and others. This is the story that assessment must tell writers and everyone involved in the assessment equation. That’s what the growth lenses are all about.

Through my son Ben’s growth as a writer I was able to witness how various reading and writing assessments told him stories about how writing and reading work. Sometimes he internalized these stories and told them to himself, and sometimes he resisted and rewrote them. Some stories led to growth in the right direction, and some hindered his development. Whether formative or deformative, these assessments – and the stories they told to Ben – have helped to form Ben’s relationships with decision-making, his intention, the medium of written language, and an audience of self and others.

The medium of written language seems the most familiar consideration in writing assessment, so it’s tempting to project traditional writing assessment practices onto it. Any correction a teacher makes on a student’s essay, after all, is a correction of the writer’s use of the medium.

Maja Wilson is an Assistant Professor of Education at the University of Maine, Farmington. She is the author of Rethinking Rubrics in Writing Assessment, which won the Council on English Education’s Britton Award in 2007. She has also written various articles about writing assessment, response to student writing, and the accountability movement. She has taught in public schools for more than twenty years.