The Value of Reading from Multiple Sources
END_OF_DOCUMENT_TOKEN_TO_BE_REPLACED

The Value of Reading from Multiple Sources 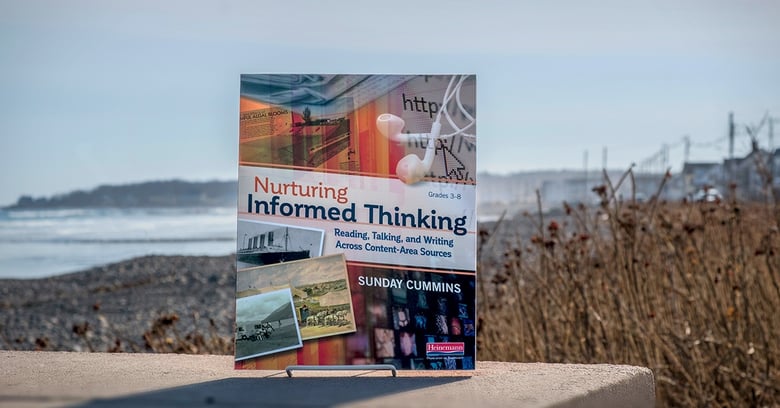 Christopher Columbus was an explorer. He discovered America and was also very brave. I don't know much about him, but that is what I know.

Caleb continued the lesson by reading aloud two picture books, Follow the Dream (Sis 1991) and Encounter (Yolen 1992). Each of these books reveals a clear point of view. In Follow the Dream, a nonfiction account that follows Columbus as he plans his voyage, Sis reveals Columbus' strategic thinking and determination. In Encounter, Yolen shares a fictional perspective of one Taino youth who, after an ominous dream, is alarmed by the appearance of strangers on his community's shores and warns his people not to befriend Columbus and his crew. Caleb gave the students clear purposes for listening stated as questions:

After students listened to the books read aloud, they closely read short exerpts from these texts, underlined language that revealed each author's point of view, and wrote annotations. Then the teacher shared a third "text" or source—a video clip in which a narrator describes Columbus' three voyages. Included are details about how Columbus persuaded the royalty in Spain to fund his journey and how he enslaved the native peoples when he arrived after the second voyage. As they listened, the fifth-grade students took notes about the narrator's point of view. Then they engaged in student-led conversations comparing the different points of veiw in the three sources and examining how these influenced the students' points of view. When Ashlan wrote about how these sources influenced her point of view regarding Columbus, she stated:

When we compare this description to Ashlan's original assessment of Columbus—that he was simply "very brave"—we can see how her perspective has become multidimensional. This is what we want for our students: the ability to look at multiple sources and triangulate meaning from a variety of perspectives.

Careful planning of purposes and selection of sources make this an effective learning experience for these students. As these fifth-grade students read or viewed each source, they and very clear purposes to guide them in determining importance. The teacher developed the purposes very intentionally whith a clear objective. Keeping these questions as a focal point helped the students develop the skill of identifying author's point of view while also helping them learn content aobut the accomplishments of one explorer. The teacher was also intentional with the selection of sources—these three sources revealed constrasting points of view, making it easy for students to grasp the concept of author's point of view.

Sunday Cummins, a former classroom teacher and literacy coach, is the author of Close Reading of Informational Texts and Unpacking Complexity in Informational Texts.  She has a doctorate in Curriculum and Instruction from the University of Illinois, Urbana-Champaign and taught at National Louis University. As a literacy consultant, she continues to teach and learn alongside educators with a focus on reading, writing, and creating informational sources.  Sunday is a graduate of Teachers College, Columbia University and also served as Literacy Education Professor at National Louis University.  You can learn more about her current work through her blog at sunday-cummins.com.