Thinking Together with Rozlynn Dance and Tessa Kaplan 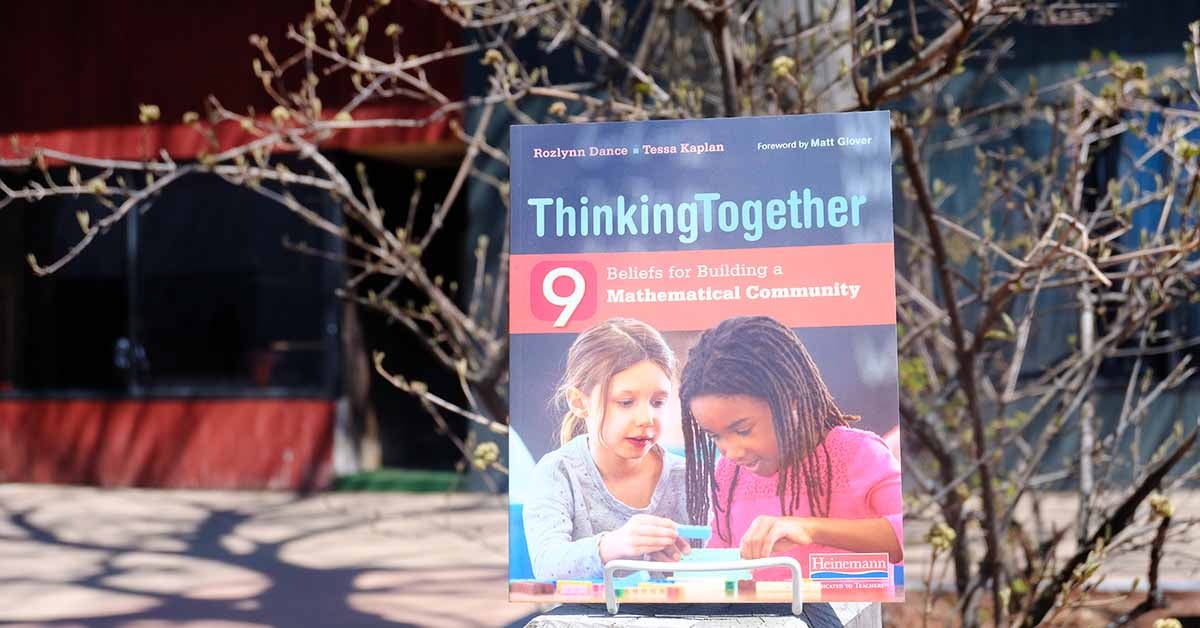 Today on the Heinemann podcast: how do we create strong learning communities where students can feel confident in their mathematical abilities?

A few years ago, Rozlynn Dance and Tessa Kaplan found their students weren’t grasping math concepts, and just getting by. They examined their math instruction, were unsatisfied, and set out to change how they taught. This work lead to their new book Thinking Together: 9 Beliefs for Building a Mathematical Community. Rozlynn and Tessa celebrate student-centered strategies that empower students to take risks, ask questions, and grow as learners. They write, “building classroom community is crucial for students to understand -- really understand-- and retain the math they're learning.”

Rozlynn and Tessa start our conversation on building mathematical confidence…

See below for a full transcript of our conversation.

Brett: Why do we need to think about building classroom communities specifically in math?

Tessa: A lot of what happens in math classrooms if we're thinking about traditional teaching is the teacher does a lot of telling. What we know about kids is that they learn best when they can construct their own learning and make mistakes and try again and make sense of what they're learning. In order for that to happen in the classroom, there has to be a community where students feel safe to make those mistakes and to try their best and to be brave with what they're learning in math. Thinking about the classroom and setting up that community is really the under pinning of everything that we need to do in math.

Rozlynn: In order for any learning within any content area there needs to be specific expectations and structure set up for the most learning to occur. We take these things like being brave or sharing your thinking, we start those things at the beginning of the year. One way we do that is allowing everybody to share their thinking whether that answer be incorrect or correct, just showing that we accept everybody's response and accepting those differences is one way to start to build that community.

Brett: How did you come to these nine beliefs?

Tessa: In the early phases of writing this book, this was actually just kind of a chapter of a bigger idea that we had, and this bubbled up as a big need that's out there in building classroom community. There's a lot out there about problem solving and how we get kids to really make sense of their own learning. As we were writing a different version of what this book might have been we realized we have to address this idea of community and so as we were sitting down and brainstorming this we really just thought through what do we do in our own classrooms to set up this community and what are the things that we really try hard to reinforce with our students to help them be successful with their learning. That's where these nine ideas kind of bubbled up in a conversation we had.

Rozlynn: Being respectful, we started with being respectful, again making those mistakes and taking risks, persevering through problems. It's funny I was at dinner the other night and my friend asked okay, what would you say is the most important of the nine beliefs and I thought that's a really good question. I don't think there's an answer to that. They all play a huge role with setting up this classroom culture and allowing kids to make sense of the math.

Brett: You mentioned respect and I actually, I kind of want to come back to respect. Before I do, I'm curious I know you said they all kind of go together and the importance of that, but was there one belief that maybe led to a bigger shift in your own teaching that made that effect, or was it all of them together?

Tessa: I think for me the one that stands out the most is kind of that idea of mathematical confidence and really building up kids' idea in themselves to believe that they can think and learn about math, so using multiple strategies and being brave and making mistakes really changed the way I taught math. I could see in my early years in teaching math there's kids that have that belief that they're not good mathematicians even at a young age, I've been teaching first grade for a long time. They think that they're not good at math. I think for me that first idea of just building inner confidence and making them believe that everyone can be a good mathematician and everybody can think and learn in their own way.

Brett: Well, let me actually come back to that topic of respect. What I love about in the book is that you write specifically about how important respect is, but then you also sort of address what if the student doesn't yet understand the concepts or the idea of respect. How do we approach that?

Rozlynn: I think kids hear that word all the time but they don't always understand what respect means, really modeling respect with every single interaction within the classroom, our tone of voice, how we talk to kids, not just the kids in our class but every kid in the building, and then I think kids pick up on that so of course we still have those kids that have a harder time showing respect ...

Tessa: I think in the book we kind of take respect too, it's not just about being nice either, it's about respecting everybody's opportunity to be able to learn. In that example where Jossiah said this is easy, maybe it is easy for him but we also want you to pay attention to how that feels for other kids when they hear you say that this is easy because it might not be easy for them and now we've almost put them down. So, giving kids that agency to not just think about being respectful, being kind, but try to put themselves in their classmates' shoes and give them that right to learn, which is one of the beliefs.

Brett: You've also got a really interesting take on students calling out answers in class, it feels sort of related to this a little bit. You say it's like stealing someone else's thinking. Why is it important to address that with your class?

Tessa: It sounds harsh the way that we say it in the book and we thought a lot about do we say it that harshly to kids but it is a harsh thing when a child calls out the answer and they're taking away that chance to learn, and that right to learn, which gets to the respect.

Rozlynn: The kids love that language as well, stealing thinking, that's such a bad thing to do so they really hear the importance, like, okay I cannot do that.

Tessa: One of the things we talk about in the when things don't seem to be working section is what do you with that one kid that just keeps calling out the answer, and often times it's just that private conversation of let's talk about what it means to be respectful of our classmates and their right to learn and how it makes them feel when you do call out the answer and now you've taken away that brain space from them where they get to think and learn. And kids get that, kids understand stealing. You have to put it in their terms.

Tessa: That came up, in our early years of trying to really teach math through problem solving and putting ownership on the kids, it's super messy. It's hard to do. As a teacher, we typically like to be in control. Doing it this way takes your control away. You're still in control obviously but you're releasing a lot of that control to the kids that you used to have. Often times, and in my role as an instructional coach now, I see teachers really struggle with that messiness of it's got to get messy before it can get clean. I think of it like when I organize things, you have to pull everything out and let it get really messy and see what's there before you can put it back together and have it be a clean running system. It's never going to be super clean either. I think it's important to acknowledge that this is a tough thing to do and it's not always going to go smoothly, so we thought adding those sections to the book really addresses that for teachers that this isn't easy. It's important work and it's not easy and we should acknowledge that.

Rozlynn: We're always wanting perfection but really, come on, we know realistically you're never going to get perfection so understanding that things go wrong all the time. How many years have we been doing this when still I'm kicking myself for a certain thing I said during the share today, things are always going to get wrong but really reflecting upon those every lesson and planning for next steps, hopefully looking at that section teachers can feel like ...

Tessa: Get some advice, here's what we tried that works sometimes, it's not always going to work but here's one little tidbit of advice we have on helping with this situation.

Brett: The foreword for the book is written by Matt Glover. He writes a lot of wonderful things about this book. Something that really struck me is he says that this book isn't really about math but rather the conditions that maximize learning from all learners in our classroom. Is that pretty accurate?

Rozlynn: Yeah, it was something we hadn't thought about until we read that from Matt...

Tessa: Since the book has come out I've had several colleagues who have read it and I recently went back to a school I used to teach at and did a little presentation on it. It was the speech pathologist and the family advocate that actually came to me saying this book totally makes sense in my setting and these are two people who don't teach math at all. But they saw that they can take these beliefs and transform them into something that works in their setting. It's not just about the math. It's about the kids. We don't teach math, we teach children.

Steph: To change the way we and our students think about math, it is important to emphasize two key beliefs:

When students are able to explain their thinking and have freedom to pick a strategy that works for them, they are able to create meaning around mathematical concepts.

Students deepen their conceptual understanding by seeing and using a variety of strategies. When exposed to many strategies and representations, students learn to pick the strategy that not only makes the most sense but is also the most efficient given a particular problem. Students also need to spend time comparing different strategies and making connections between multiple representations of a problem, strengthening their mathematical understanding as they do.

To learn more about Thinking Together visit heinemann.com, or click the button below. 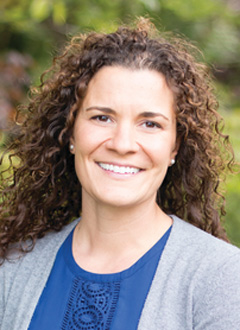 Rozlynn Dance is a first grade teacher in Federal Way, Washington with more than a decade of elementary classroom experience. She has worked closely with colleagues developing curriculum and providing mathematical professional development for K–5 teachers. Follow her on Twitter @RozlynnDance 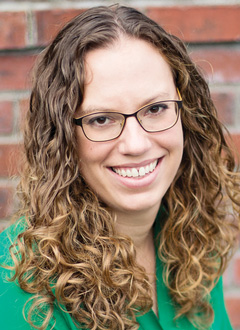 Tessa Kaplan is a K–6 Instructional Coach in Shoreline, Washington who is passionate about helping young children truly believe in themselves as mathematicians. She has 10 years of classroom teaching experience in public schools in Brooklyn and Washington State. Follow her on Twitter at @TessaKaplan84