SMP #3: Construct Viable Arguments and Critique the Reasoning of Others
END_OF_DOCUMENT_TOKEN_TO_BE_REPLACED

SMP #3: Construct Viable Arguments and Critique the Reasoning of Others

Arguably the Nine Most Important Words in the Math Common Core

I am increasingly convinced that “construct viable arguments and critique the reasoning of others” (Standard for Mathematical Practice 3) may be the nine most important words in the entire Common Core. Far more than an equal among eight practices, SMP 3 is a principle that encompasses the entire Common Core. 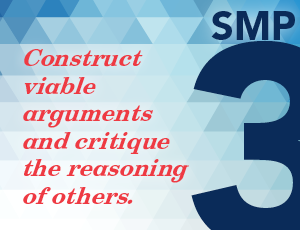 First, the practices of constructing arguments and critiquing reasoning represent a powerful cross-disciplinary approach and are as relevant in mathematics as they are in English language arts, science, and social studies. They help break down the subject-specific silos and support the understanding that communication, justification, and critique are essential components of learning.

Second, this practice is a joy to embrace because it represents a long-overdue shift away from the multiple-choice, skill-based, rule-based focus that emerged, to the detriment of all students and teachers, with No Child Left Behind. Test-prep memorization and regurgitation have little to do with thinking and reasoning and cheat students out of the opportunities consistently found in highly effective schools and gifted classrooms.

But the primary reason this practice is so important is its implications for teaching. In order for students to construct viable arguments, they must be asked why or be expected to explain their thinking or be directed to convince the class. In a classroom where the shared expectation is that all answers need to be justified, students consistently construct arguments. They communicate their understanding and demonstrate their thinking process. No longer is it acceptable to stop at “83” or “9 square centimeters.” Instead, they individually and publicly justify why the answer is 83 or 9, thereby giving the teacher and the entire class an opportunity to discuss alternative explanations.

Similarly, in order for students to critique the reasoning of others, they must be in a classroom where reasoning is made public and open to review and comment. A classroom culture that values critique rather than the one right way to get the one right answer is a culture in which students are far more actively engaged in their learning.

Again, in place of a single approach or justification, many approaches and justifications surface, thereby strengthening everyone’s learning. In addition, given the learning opportunities of mistakes and misconceptions, critiquing others’ reasoning helps address common mistakes and misconceptions, also to everyone’s benefit. It is a joy to observe a class focus on the mathematical reasoning of three different groups of students and then discuss approaches: what was the same, what was different, what was correct, what was flawed. What better preparation for life and citizenship could we hope for?

Imagine a world in which teacher preparation, coaching, support, and evaluation all focused on the degree to which any lesson included opportunities both to construct and effectively implement viable arguments and to critique the reasoning of others!

When you read and reread and think about and then think even more about the following paragraph from the Common Core, consider how it enhances both the teaching and the learning of K–12 mathematics:

Mathematically proficient students understand and use stated assumptions, definitions, and previously established results in constructing arguments. They make conjectures and build a logical progression of statements to explore the truth of their conjectures. They are able to analyze situations by breaking them into cases, and can recognize and use counterexamples. They justify their conclusions, communicate them to others, and respond to the arguments of others. They reason inductively about data, making plausible arguments that take into account the context from which the data arose. Mathematically proficient students are also able to compare the effectiveness of two plausible arguments, distinguish correct logic or reasoning from that which is flawed, and—if there is a flaw in an argument—explain what it is.

Think about how schools and teachers are helping these students learn to think, learn to communicate their understanding, learn to listen to their peers, and learn to respectfully critique the reasoning of others. No other words anywhere in the Common Core are as important as these.

Steve Leinwand is the author of the best-selling book Accessible Mathematics, which looks at how simple shifts in planning, implementation, and assessment of daily mathematics instruction can significantly enhance the quality of your teaching and its impact on student achievement. He is also the author of Sensible Mathematics, a guide for making the necessary shifts in curriculum, instruction, assessment, and professional development to meet and exceed the Common Core State Standards. Follow him on Twitter @steve_leinwand.