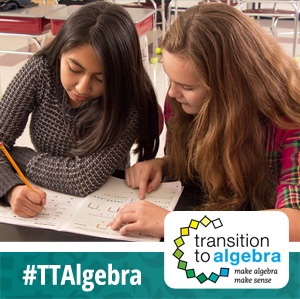 Over many months Heinemann has worked with the dedicated folks at Education Development Center (EDC) on a resource for students who struggle with algebra and the teachers who struggle to teach them. In conversations about the audience, the challenge, and EDC’s approach, Heinemann staff members imagined ourselves back in school, sweating our way through algebra. Some remembered dinner-table discussions in which our own kids shared feelings of helplessness (and hopelessness). We knew from anecdotal experience that we were taking on a very big problem.

There’s nothing worse than witnessing a nonproductive struggle. As professionals dedicated to teacher excellence, it goes against the grain, and as parents—well, so many of you can relate. As a company, we are therefore ecstatic to be bringing Transition to Algebra to the marketplace, hopeful that this resource will turn the cycle of algebra woes around.

Verifying What We Already Knew

Research substantiated our suspicions. Almost 40 percent of U.S. students take Algebra 1 twice in high school. Eighty percent of high school dropouts cite failing Algebra 1 as the tipping point in their decision to quit school. PISA scores continue to highlight that math is an area of weakness for our students; yet we know that math ability is an important predictor of a successful future. In The Smartest Kids in the World and How They Got That Way, Amanda Ripley writes, “America’s math handicap afflicted even its most privileged kids, who were more privileged than the most advantaged kids in most other countries. . . . Our richest kids attended some of the most well-funded, high-tech schools in the world. Yet these kids, including the ones who went to private school, still ranked eighteenth in math compared to the richest kids in other countries.” She asks, “Why weren’t our kids learning the universal language of logic?” Her research revealed that about half our high school graduates are underprepared for college freshman math. Bottom line: we have smart kids who have learned to follow rules and procedures but without understanding. When they get to algebra, the proverbial rug is pulled out from under them.

Ripley documents the journey of three U.S. high school students during a year abroad in Finland, South Korea, and Poland. Their stories got me thinking about the math phobia predominant in U.S. culture. It’s incredibly common to hear people say, “I’m not good at math” or “I’m not a math person”—we wear it as badge of honor—but we would never grin sheepishly and say, “I’m not good at reading” or “I’m not a reading person.”

Data Is Only Part of the Story

Talking to algebra teachers (who— surprise!—are often parents, too) about their experiences, we asked, “How many of your kids struggle to pass Algebra 1? How many don’t pass the first time?” To a person, each teacher could quickly identify the kids, the class, the failed attempts, but also expressed a strong desire to stop the cycle. Then we asked, “What do you do about that?” The answer was often a redo, with longer and slower (maybe louder ☺) sessions. But if kids are already questioning their smarts, this isn’t logical. As a friend from Texas once told me, “A hog don’t get no fatter by weighin’ it.” Amen to that.

The challenge? Finding the right intervention—or rather, prevention. We at Heinemann strongly believe in the latter, focused on helping the teacher make algebra make sense for kids.

Enter our mission-driven colleagues at EDC. Transition to Algebra is inspired by the work of W. W. Sawyer and Robert W. Wirtz, mathematicians and educators who understood the power of puzzlement, curiosity, and surprise in getting students to make sense and use their own logic to learn mathematics. The program’s authors write:

Part of Sawyer’s “vision” was literally about vision: the value of visual imagery to capture mathematical structures and ideas with fidelity, and to make them accessible to students who would not otherwise “see” the logic. By reducing reliance on heavy text, Sawyer and Wirtz, way back in the ’60s, showed how to reach a broader audience with algebra that was clear, deep, beautiful, and intriguing.” (Goldenberg et al. 2014)

Transition to Algebra, or TTA, stems from EDC’s continued focus on mathematical habits of mind. Almost twenty years ago, Al Cuoco and TTA authors Paul Goldenberg and June Mark wrote “Habits of Mind: An Organizing Principle for Mathematics Curricula” (1996), which opened a line of thinking now reflected in the Common Core Standards for Mathematical Practice. TTA uses puzzles, conversation, activities, and explorations designed to build confidence and help students create and document their own logic and learning.

At the end of almost every conversation we’ve had about TTA, whether with a publishing colleague or a math teacher, that person commented, “I wish I’d learned math this way.” We can’t change the past, but we certainly can illuminate the future.

What’s your algebra story? When someone broaches the topic, do you fade into the nearest corner? Break out in a cold sweat? Or dive in and wonder what the heck is wrong with everybody else? Do you love math? We’d love to hear your story. Together we can change the math-phobic culture of our country and help all kids maintain their drive and curiosity, develop higher-order habits of mind—the ability to reason and problem-solve, to be our next generation of innovators. We can. And we must.

Anita has been involved in educational publishing since 1987, spanning a variety of roles. Currently an Area Sales Director for Heinemann, she led the editorial development team that published EDC’s Transition to Algebra resource.

Number talks create confident student problem solvers Classrooms (at all grade levels) are filled with st...
May 11, 2022 8:19:51 AM

What are visual patterns, and how can they open new possibilities for building math routines?
Apr 7, 2022 3:45:00 AM

What is annotation? Annotation is an instructional move a teacher makes during full group discussions. It...
Mar 14, 2022 8:41:50 AM