The Journey Toward Making the Journey, fourth edition
END_OF_DOCUMENT_TOKEN_TO_BE_REPLACED

The Journey Toward Making the Journey, fourth edition 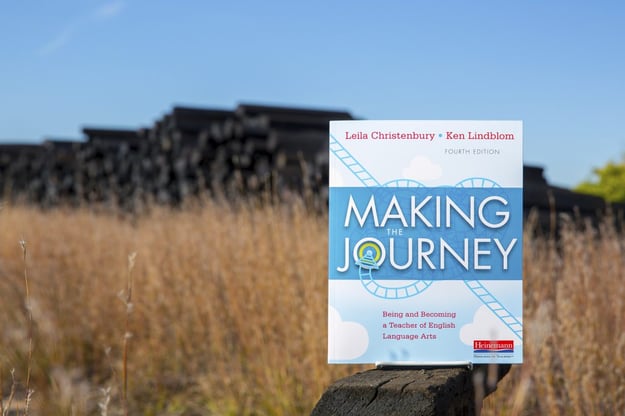 Leila Christenbury and I recently published the fourth edition of her well-known guide for the field’s newest teachers of English. Leila wrote the first three editions on her own. So how did I get so lucky to be Leila’s co-author for this edition?

In 2007 Leila Christenbury congratulated me for being named editor of English Journal, and she invited me to contact her anytime I needed help, an invitation I’d end up accepting quite a few times. Leila and I quickly struck up a friendship, and I found myself in regular communication with one of my professional heroes.

So good was our friendship that Leila even forgave me for asking her to guest edit the NCTE 100th anniversary issue of English Journal, a massive job, which Leila took on with grace and gusto. I got to see firsthand how eloquent, detail-oriented, and reliable Leila is behind the scenes as a writer and editor, like looking behind a watch face to marvel at the moving gears and winding springs that go into the deceptively simple act of telling time.

Several years later I was searching for a seat at the Secondary Luncheon at the 2014 NCTE Convention when Leila called me over to sit next to her. I quickly obliged as Leila is one of those people who is able to balance professionalism with a world-class cut-up sense of humor. Professional Hint: Those are just the people you want to sit next to at luncheons!

Making the Journey: Being and Becoming a Teacher of English Language Arts (MTJ) was first published in 1994, shortly after I left teaching high school English full-time to earn a doctorate in the teaching of writing.There were and are other excellent books about teaching English available, but MTJ was just so readable, so personal, so dead-on in its perception of the problems and possibilities of teaching, I connected with it immediately. Christenbury became my trusted senior colleague, explaining in brutally honest but good-humored terms exactly what I needed to know.

In 1997 I took a position as a teacher of rhetoric and composition at Illinois State University, where I spent most of my time teaching future college composition professors. Much as I loved that, I missed working with high school English teachers more. A few years later, 9/11 happened, our world shifted on its axis, and my wife and I decided to move back home to New York. As part of that move, I sought positions not in composition but in English Education. My wish came true, and I was hired in 2003 to direct the English Teacher Education Program at Stony Brook University. For my first methods course I selected--what else?! ---Christenbury’s Making the Journey. Even better, a second edition had come out in 2000.

I taught this book happily for several years, and then a third edition was published in 2006. Fantastic! Pre-service English teachers adored this book. The friendly voice and the dramatic real-world stories of Christenbury’s classroom entranced the students. The background, directions, and advice structured our class discussions in ways that were engaging, practical, and based on research.

But around 2010, I started asking my students (on the anonymous course evaluations) if I should keep using MTJ3 even though it had been written before Common Core, before the major extensions of standardized exams, before Big Data, the de-professionalization of teachers, the spreading of cyber-bullying, the new emphasis on argumentative writing and informational texts, and the possibilities of new technologies. Each semester my students’ responses were emphatic and unanimous: Yes! I kept ordering the book, we devoured its timeless guidance, and we read other sources for more updated work.

So, when Leila asked me to join her at the Secondary Section Luncheon in 2014, I had the chance to ask her what I really wanted to know.

“When are you going to put out a fourth edition of Making the Journey?”

Leila’s response surprised me. “Oh, Ken, I don’t think I can do it,” she said with an uncharacteristic twinge of regret. “I’d have to study the Common Core, which Virginia has not adopted, and there’s so much going on with technology that I am afraid I would never get up to speed.”

I was disappointed, but I could appreciate Leila’s position. As luncheon host, Jocelyn Chadwick welcomed us and introduced the distinguished secondary educators on the dais, I started thinking about what I could find in the book exhibit to replace MTJ.

I was coming to the conclusion that there simply is no replacement for the collegial wisdom of Leila’s book, when she turned to me and whispered, “If I had a good co-author, maybe I would be interested in a fourth edition.” I’m not ordinarily shy -- my friends would surely laugh at that understatement -- but I wouldn’t let myself believe what Leila might possibly have been suggesting, and I said nothing.

She continued. “Hasn’t New York adopted Common Core, and don’t you use a lot of new technology in your teaching?”

“Yes,” I finally said, “And I also really like teaching informational texts, and I think there’s a lot of great ways to use them to enhance rather than replace literary texts.”

Leila stopped whispering and started writing on a napkin. About 5 minutes later she handed me a table of contents and asked me to make changes. I added a chapter on informational texts, something on genre analysis, and I put back the chapter on questions and questioning that Leila had taken out.

She took the napkin back, read it and said, “If you will co-author it with me, I’ll propose the fourth edition to Heinemann.”  Probably the best moment of my professional career.

From there, the story is standard writing business. We spent months composing a detailed proposal and a sample chapter. We worked with Heinemann on specifics, and then we got the good news that they were in. About 18 months -- and hours and hours of writing, chatting, revising, and editing later: here is MTJ4!

If it’s half as fun to read as it was to write, I think our colleagues will enjoy it.

Ken Lindblom is Associate Professor of English and Associate Dean for Academic Programs in the School of Professional Development at Stony Brook University (SUNY), and a former high school English teacher. Ken has served as editor of English Journal and is on the Executive Board of the Conference on English Education (NCTE)

Leila Christenbury is Commonwealth Professor of English Education at Virginia Commonwealth University and a 40-year veteran teacher both in secondary English and higher education. The recipient of both the David H. Russell and the James N. Britton awards for her research, she is a former editor of English Journal and a past president of the National Council of Teachers of English.