We are deeply saddened to share the passing of educator, author, and friend Thomas P. Carpenter. Heinemann has been privileged to publish Tom's work for more than 20 years. 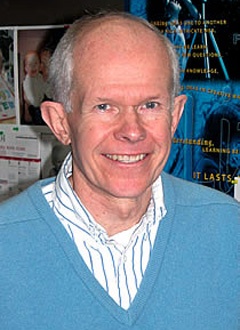 At the time of his death, Tom was Professor Emeritus of Curriculum and Instruction at the University of Wisconsin-Madison where he taught for twenty-five years. He was a former editor of the National Council of Teachers of Mathematics (NCTM) Journal for Research in Mathematics Education, and he received the NCTM Lifetime Achievement award for Distinguished Service to Mathematics Education (2004) among other awards.

Tom was a lead researcher on the teams of several influential books, most notably Children's Mathematics, a guide for teachers that remains unparalleled in its ability to help teachers develop children’s mathematical understanding. 2019 will mark the twentieth anniversary of its first edition.

His team's most recent book, Young Children's Mathematics, expands upon his previous writings and explores the development of mathematical understanding in our youngest learners.

"We are heartbroken to have lost a key member of the Heinemann author family," said Vicki Boyd, EVP and General Manager of Heinemann. "Tom, along with his colleagues, changed the landscape for math instruction for elementary children. Tom embodied the mission of Heinemann’s values. His worked helped educators understand children’s thinking and use a more student-centered approach to teaching mathematical concepts. We are honored to have served as Tom’s publisher for over 20 years."

Tom's presence in the education world will be greatly missed. His editor and several Heinemann authors have shared their thoughts and condolences below, which we hope underscore the massive influence he has had on mathematics education. We will all miss him.

I am saddened by the passing of Tom Carpenter. At the core of his work, Tom taught us to listen to our students’ mathematical thinking. He will be greatly missed by countless math educators who have been informed, influenced, and inspired by his work.

When Lynn Steen wrote On the Shoulders of Giants: New Approaches to Numeracy he based his title on the well-known quote of Isaac Newton, “If I have seen further it is by standing on the shoulders of giants."  Tom Carpenter was one of those giants in the field whom so many of us found provocative and insightful. His work was ground-breaking. We learned from him and with him, and many of us based our own scholarly work on his ideas. He opened our eyes to the way children think, to how context affects the strategies children use, and to how children’s strategies—not our own—should be the starting point of instruction.

I remember so fondly the early days of Math in the City (1995–2000), when my students and I spent hours studying Tom’s tapes to examine the big ideas and strategies children were constructing about number and operation. Coupled with children’s work we were collecting in New York City,  the work informed the construction of our eventual "landscapes of learning."

The mark of a great scholar, a giant in the field, is when his work lives on way past our frail short-lived bodies, when it is instrumental in changing the lenses of the people who remain, when it offers shoulders to see new directions and horizons. Tom’s work was that. It opened new doors, new possibilities, and enriched the lives of many children and teachers.

Tom Carpenter was a giant in our field and a mentor to hundreds who stand on his shoulders. While many have researched children’s learning of mathematics, Tom’s work, in conjunction with the CGI team, put these findings into clear and actionable form. In the gradual, and still ongoing, move from memorizing procedures to cognitively guiding conceptual understanding, Tom’s work changed the arc of mathematics teaching over the past 40 years.

When I first started at Heinemann, I had a lot of reading to do to familiarize myself with our body of work. One of the first books I read was Children’s Mathematics—which was appropriate, since it and the work on Cognitively Guided Instruction that underlies it are at the very heart of our math publishing line and at the heart of what we believe about instruction in general. It carries the key message that we must listen to children to understand their thinking and that our teaching must start with that thinking and help children build on it. And Tom Carpenter was at the heart of CGI.

I first got to work with Tom a few years later on the second edition of Children’s Mathematics and then on Young Children’s Mathematics. His thinking and his writing were precise, clear, and deeply rooted in a passionate belief in children’s ability to think mathematically and in the right of every child to have their thinking heard and understood. He was a pleasure to work with, too: pleasant to talk to, responsive to editing (while standing his ground when he felt strongly about something), and generous with his time. It is one of the great privileges of my professional life that I got to work with him. Sending all my best wishes to Sally, the rest of his family, and his many colleagues and friends.

What is Cognitively Guided Instruction?

Hundreds of thousands of teachers across the US teach mathematics using Cognitively Guided Instruction (C...
Apr 7, 2020 11:14:20 AM