On the Podcast: Writing Unbound with Tom Newkirk
END_OF_DOCUMENT_TOKEN_TO_BE_REPLACED

On the Podcast: Writing Unbound with Tom Newkirk 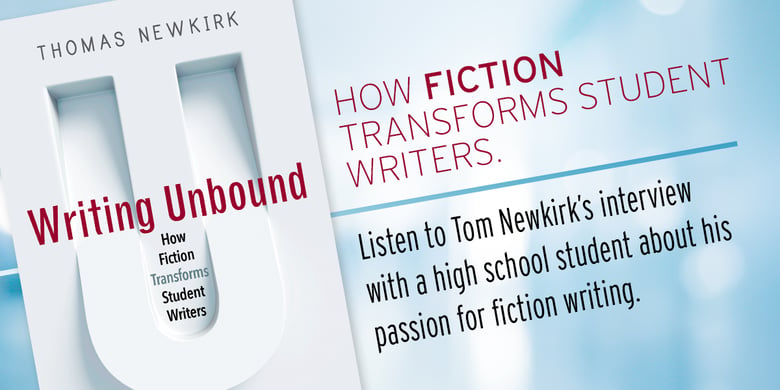 Most of us write every day, but do you remember the last time you created an imaginary world? We all love stories and, as Don Graves showed us, we all have a story to tell. But in schools, the focus is increasingly put on analytical writing. When did fiction writing fall to the side?

Today on the Heinemann podcast author Tom Newkirk explores the value of creating worlds through fiction writing. As Tom says, “our minds were made for stories,” so he decided to sit down with high school students to hear about the fiction they write in and out of school…

Below is a full transcript of the episode.

Student One: …her breathing was labored and shallow. It reminded me of the time when she had bulldozed me over and had knocked the wind out of me while we were playing fetch in the backyard. I remember trying to fight for each breath. I put my hand over her fuzzy muzzle, now only…

Student Two:  …the top of the dresser and neatly put them on. He was horrifyingly blind without them. He thinks he looks better with glasses on, but without he thinks he looks intimate, like a new person…

Tom: That's the sound of high school students reading their fiction. It's not a sound you're likely to hear these days, at least in school. Fiction writing dies out and the focus shifts to analytic writing. Students read fiction, but they rarely write it.

But it doesn't really die out. For many it goes underground, off the grid, in writing camps, with friends, online, on fan fiction platforms. On one of these websites you can find over 750,000 stories written off Harry Potter, three quarters of a million. Another quarter million off Twilight. Superheroes may have no place in school, but their powers are strong on the outside, just check what's at the movies.

Over the last year I tracked down these fiction writers. I interviewed them in local libraries. I wanted to understand the worlds they created, and the pleasure they took in creating them. I wanted to know how they got their ideas. And I wanted to know how their fiction writing contrasted with school writing, which brings me to Ernest, a ninth grader. Ernest is not his real name, but he chose it for this podcast. For Ernest it all started in second grade on a story called Cosmos.

Ernest: It was a sci-fi story. It was about these three genius school kids who were abducted by aliens, and then they had to fight some intergalactic space threat. And we wrote that in second grade.

Tom: So you each wrote a chapter?

Ernest: Yeah, we would try to write our own chapters. After that I just kind of started writing a bunch of different books, and I'd usually only get to like three pages before started writing a new book, just trying to see where I best fit.

Tom: That led to Son of the Wild.

Ernest: Which was inspired by my favorite author, Rick Riordan, and his whole Percy Jackson series. It was about Peter Woodland, who was the son of Pan, who lived in NY. But after his dad was killed in an explosion he stowed away to St. Martin, where he lived the rest of his life until adventure brought him back to America where he had to fight a giant snake, basically.

Tom: Which led to The Boy who Lived on the Bear.

Ernest: Then I evolved to The Boy who Lived on a Bear, which is about these giant creatures invading Earth, or they're already on Earth but invading the land. And then this boy got adopted by one of them, which was a bear. And then he builds a home and lived on it, and then he has to fight the titan army.

Tom: Which brings us to his current effort, The Test, a dystopian story set in a world devastated by nuclear war. I was curious about where he got his ideas.

Ernest: I heard this quote. I can't remember who said it, but, "You get your best ideas when you're bored or tired." And sometimes I'll get these amazing ideas just in my bed and I'll start writing them down. I'll typically get them ... I do this thing; it's kind of embarrassing, but I just kind of run around my house while kind of gesticulating with my arms, just kind of being like, "This will happen in this scene, and that would happen."

Tom: He also benefits from working with his friend, Chris. Together they imagined a video game, Steve.

Ernest: He and I have a very similar psychology when it comes to creating. We've had similar ideas for video games, for books as well. Like we had this idea for a video game called Steve.

It's basically this game about ... There was this kid names Steve who was a technological genius who started making robots to help people, and he made this company called Steve. But he didn't think anyone would take him seriously, so he hired this older guy to pretend to be him. And basically at first they started inventing like metal arms to help people who ... help amputees, people ... metallic lungs to help people with lung cancer or whatever, basically metallic organs to help people whose organs didn't work anymore.

And then eventually World War III started, and he started building weapons out of all this technology. And then when he won World War III for America, that's when he started going a bit crazy. And then he took over America and he took over the world. No one could stop him because almost everyone had at least one Steve robotic part in them, so he could just shut down that robotic part and they would die. So they had to follow him.

So they started making a revolution, and that's where your character takes place as a part of that revolution. You basically have to go through America, go through all these different points and fight robots. And the typical robots would just have blades that come out of their arm, some of them would have guns, some of them could fly. There'd be like a boss in every area. Some of them will have giant whips. There'd be a giant sewer snake robot that you'd have to fight. And then you get to the main fight, and my idea that Chris...

Tom: It only gets more complicated. But school writing is more constricted, not the free space he craves.

Tom: In what way?

Tom: I want to go back to school. Why do you think school restricts you?

Ernest: I think it's just because they like order. They like things to go according to plan. And the thing about creativity is that it never goes according to plan. It has no order to it because creativity's this wonderful tool that I've been gifted with. I think the school doesn't really like that. I think they encourage you to be creative but creative in their way, not yours.

Tom: Why do you think ... Maybe you don't have any answer, but why do they... why do they just want you to be creative in their way?

Ernest: I don't really have an answer, but the way I think it works is that they want you ... because the school wants you to do what they want you to do, and I can't really describe that. And maybe college is going to be different. I hope it is. But I think at least for public school systems it's more controlled and more kind of guidelined. There's a lot of rubrics and this kind of stuff that tells you this is what you can do and this is what you can't do.

Tom: Midway through the interview, Ernest mentions that he has ADHD, which he sees as useful to his fiction writing.

Ernest: I think academic-wise it can get in the way, but creative writing-wise it helps.

Tom: Say something more about that.

Ernest: Like, academic-wise it's hard for me to focus on what the teacher's trying to say. But creative-wise it helps me focus. It helps me constantly think of ideas because that's something I always describe myself with how I'm constantly thinking of ideas. Even when it looks like I'm not doing anything, I am in my head.

The thing about creativity is that it's a blessing and a curse because you hear one thud downstairs and then you start thinking, "Is it a killer? Is it a demon? What is it?" And then that's something that I've always struggled with. But when it comes to creatively writing or thinking of a plot it helps because I can always think of different viewpoints.

Tom: Ernest is the second ADHD student I've interviewed who saw it as an advantage in fiction writing.

Ernest: I've always had this fear of not being able to control my own life. But when I'm writing my own book I do have control. I guess I'm kind of like the god of that series because I can choose if someone lives or dies, I can choose if someone's happy or sad. And I guess I've kind of grown up ... I'm a middle child, so I don't have a lot of power in the house, because my brother can do whatever he wants and my little sister can do whatever she wants because she's the youngest. My brother's the oldest. He has the most independence. She has the most reliance on my parents.

So I think writing these creative stories gives me a lot more power. And when I write about my real life I don't really know how to describe myself. I've always just kind of said I'm creative, and that's it. I just relied on that ability to create.

Tom: The attraction of fiction for Ernest is power to make a world, make a future, to be in control. I remember years ago I watched a first grader named Adam in a writing group conference. The world as he created it was under attack, in danger. And a girl raised her hand and asked him, "Will the world survive?" Adam hesitated, and she asked again, "Adam, will the world survive?" Still he paused. "I'm thinking, I'm thinking." It was all in his hands.

Can schools create a space big enough and free enough so that writers like Ernest can write the way they want to? Or do filters inevitably get in the way? Filters, grades, rubrics, special requirements, limits, comparisons to other students that contaminate this space. Can we enter the dizzying worlds that Ernest and his friends create? Can we experience with them the dangers and narrow escapes? Can we spur them on? It's a challenge worth taking up. 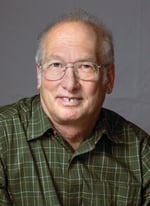 Thomas Newkirk is the author of numerous Heinemann titles, including Minds Made for Stories, The Art of Slow Reading, The Performance of Self in Student Writing (winner of the NCTE's David H. Russell Award), and Misreading Masculinity. For almost three decades, Tom taught writing at the University of New Hampshire where he founded the New Hampshire Literacy Institutes, a summer program for teachers. In addition to working as a teacher, writer, and editor, he has served as the chair of his local school board.

It Didn't Start with COVID: Responses to Student Mental Health