Original Ideas - Minds Made for Stories by Thomas Newkirk
END_OF_DOCUMENT_TOKEN_TO_BE_REPLACED

Original Ideas - Minds Made for Stories by Thomas Newkirk

Narrative is regularly considered a type of writing—often an “easy” one, appropriate for early grades but giving way to argument and analysis in later grades. Thomas Newkirk’s new groundbreaking book, Minds Made for Stories, challenges all that. It invites readers to imagine narrative as something more—as the primary way we understand our world and ourselves. In a selection from Tom’s acknowledgements, he writes about his inspiration for the book.

I remember with mortification my first meeting with Peter Elbow, who figures so prominently in this book. He came to the University of New Hampshire to give a talk, and I picked him up at Logan Airport. On the ride, he asked me about student writing at UNH. I launched into a description of how students were stymied by trying to be too formal, and they needed the chance to just let the writing flow like talk, without any worry about correctness. So I had them do nonstop writing for about ten minutes at the beginning of each class.

I presented these observations as if they were truly and originally my own. I was passionate. But suddenly, as I reached Portsmouth, I had a flash—I’d learned all of this from Peter Elbow, the man sitting beside me, who was graciously nodding his head, as if I was telling him something new. 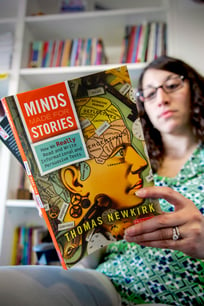 My advisor James Kinneavy once remarked that his original ideas were those for which he’d forgotten the source. So true for me. So let me here acknowledge those I can’t acknowledge by name, whose ideas became so much a part of my thinking that it seems like my own. I know you’re out there.

But the book draws on three men who have shaped my thinking. The first, is, clearly Peter Elbow, whose most recent book Vernacular Eloquence (2012) is a crowning achievement in a career of innovation and creative thought. As in so much of my work, I draw on the work of Don Murray, mentor, friend, colleague, and breakfast companion. His claims for nar¬rative as a foundational writing mode gave me confidence that I might be on the right track.

Occasionally we read a book that fundamentally alters our thinking. There is a before-and-after quality to the experience of the reading. This is the case for me with Daniel Kahneman’s Thinking, Fast and Slow (2011). He demonstrates, beyond any doubt, that we are narrative creatures—always asking, “What’s the story?”

Click here to read a sample chapter from Minds Made for Stories.

Celebrating 200 Episodes on the Heinemann Podcast!

On the Podcast: Demystifying the Writing Process with Kelly Boswell

On the Podcast: Vocabulary Development Aross the Day with Tanya Wright and Katie Wood Ray