On the Podcast: The Journey is Everything with Katherine Bomer
END_OF_DOCUMENT_TOKEN_TO_BE_REPLACED

On the Podcast: The Journey is Everything with Katherine Bomer 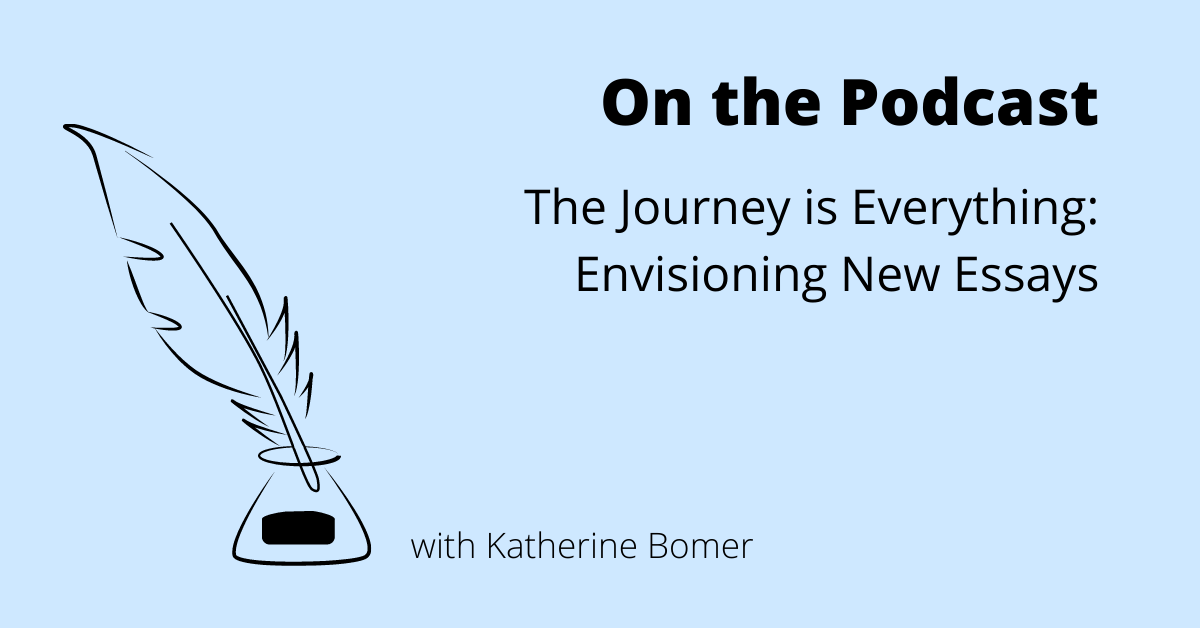 What comes to mind when you think about the traditional 5-paragraph essay? Do you cringe? Sadly, many students only know “essay” as a 5-paragraph, tightly structured writing assignment that must check all the boxes of a standardized formula. How did essays in school get so far away from essays in the world? In her newest book, The Journey is Everything, Katherine Bomer makes a case for the benefits of authentic essay writing that breaks free of the 5-paragraph formula used in most middle and high school English classes.

Katherine wants to restore essays in schools as writing to think; because the act of writing provides a visual tool, one of the most powerful tools humans have in aiding the process of thinking. Katherine wants students to be able to write the essays that they want to write and people want to read… She says if we give students the freedom to think, without forcing ideas into templates, they can actually produce better writing.

We started our conversation around what essay looks like in the real world?

A transcript of this episode is available below.

Katherine: Well, that is really kind of the basis of the argument of the book is that while essay is ... I use the word alive on purpose because it does feel like this giant animal or something that's just breathing. Last night, on the airplane, I was reading essays in the latest New Yorker magazine. This morning, first thing, I'm of course on the internet, looking on at people's blogs and looking on the news, and there are essays about Orlando and gun control, and there was the idea of America right now kind of sitting in politics. Of course, essay doesn't need to be so serious. There also, I think of a lot of comedy monologues that are really essayistic.

I would say that in the world, right now, on the internet, the blog is probably the closest thing to the essay that I can find. There are thousands and thousands of them out there. People are writing this constantly and reading this constantly in the world, in their lives. In schools, we are unfortunately still locked into a system of a formulaic, usually five paragraph, famously, form that has been around for generations. My mother is going to be ninety-eight years old this year, and she remembers writing similar kind of formulaic essays in high school, and hating them. Hating them is pretty much what everyone says when you bring up the word. I often begin my workshops with, "What do you think of when you hear the word essay?" People's, "[inaudible 00:03:11]." They immediately groan, and teachers hate grading them, and students hate writing them. I just think we can do better. Why should we write those formulas when we know we can write better?

Brett: You recommend that teachers have students read essays before they try and write them. Why is that?

Katherine: Well, reading before you write is something that all writers do. Writers read voraciously, they widely and voraciously, because they're constantly feeding themselves with ideas and language, and even interesting ways to structure pieces of writing. That's what writers do, and so I believe that not only students, but teachers also should read as many essays as they can, looking for what the essay has. The essay has a kind of voice. I would say the voice is the most salient feature of essay. When you fall in love with a certain essayist, it's because you love her voice or his voice. Phillip Lopate said that when he reads Montaigne, the man who invented essay, by the way, in the sixteenth century. When he reads Montaigne, he has the experience of sort of saturating himself in Montaigne's mind.

I love that word, "Saturating yourself." It's like you're at a dinner conversation with the most fascinating person, and you just ... You're just hanging on every word. "What do you think about this?" The reason that you feel that way is because the language of essay is really the language of thinking. It's not like the formula where you are supposed to have an idea about something, and plug it in to a certain spot, and then come up with three reasons why, or three forms of support, and then restate your same idea at the end. It's more like the writer is in the act of thinking as she is writing. It has that tone, that quality to it of, "I'm just sitting here thinking about this," and uses language like, "Maybe? I don't know. Why is this so?"

Just this week I was in Indianapolis, teaching at a summer writing institute, teaching essay, and the teacher wrote an essay in just two days, and she just sent it to me this morning, and it's just so lovely. She's writing about the idea of finding time for herself, like almost in quotes, "Time for myself. Because I'm so busy, so I'm trying to find time for myself." She writes through that. Like what does that mean? How do you do that? She finally comes to this question where she says, "Actually, I don't really like doing these things you're supposed to do when you're finding time for yourself, I actually like to be busy." She writes this beautiful like that says, "Perhaps I find solace in the busy. Perhaps it's where my soul resides. Perhaps it is in the busy that I find the best version of myself." Isn't that lovely?

Katherine: The rhythm of that, and the repetition of the word, "perhaps," and almost like a question. That's the language of essay. You only know that, or get that, by reading a lot of essays.

Brett: That specifically is so relatable to so many teachers as well. I mean, that really is, it beautifully captures that thinking. Well, your book is a treat. Within that book, you have a treat for readers at the end of it. Eleven guest essays. Why did you decide to include them, and what do you hope they offer teachers and students?

Katherine: Oh, thanks for bringing those up. That's probably my favorite part of the whole book. The one problem or issue with teaching essay, in elementary and middle school especially, is that there really aren't enough models, not enough sort of age appropriate models for kids. That is a real problem I have found with trying to teach essay. Even when I was a classroom teacher, that was a problem for me too, so I mostly had to write my own and then share them with kids. I think there are a lot of good mentored texts for high school kids, because they can use samples from The Best American Essay series, and from online, and magazines and such. When it comes to children, say from third grade, and into middle school, it's a little more difficult.

As I was writing the book, I had this brilliant idea. I think it's brilliant to ask my dear writer friends if they would mind gifting me and gifting the world with little essays, written expressly for kids. I put the idea out to my friends, and lo and behold, they all said, "Yes." Thank you so much. They wrote amazing essays. Eleven different ones from different people that people know in the world. They were thinking of ... I said, "Pick your age group. I don't care who write for, but just keep kids in mind." I arranged them kind of age appropriateness, from the youngest kids to high school kids.

They are so interesting and different from each other. There are two essays about cats, and they're completely different from each other. That's what I want teachers and students to see, is that the essays are not the same, unlike the formula, which is famously just one after other, blah, blah, saying the same thing. They're so [inaudible 00:08:24] divergent. I'm so excited about those to use in classrooms as mentor texts.

Brett: The book is filled with specific strategies and tips for helping students develop ideas into essays, which is a wonderful bonus to the book. For a teacher who's deciding what to do with students from all these possibilities, what's most important to keep in mind?

Katherine: That's true. In a way, my book has way too many strategies in it. I just kept going and going, "Another thing you could try." That's good. It's a world of possibilities, and it stretches, the strategies and ideas stretch the entire length of the process, from how to read essays, and notice how they're crafted and the features, to then generating ideas for your own essay, to elaborating and texturing your idea, to drafting and revising, and even, in the end, how to, if you must, how to bend this type of essay to fit more academic forms of writing. All across the book are ideas and ways for how to do that.

Brett: Readers have said they'd like to continue the learning on essay, or even submit ideas. Where is the best place for them to go to do this?

Katherine: Oh, I'm so glad you asked that, because I just recently, all by myself, [inaudible 00:10:09] with some ideas from you, and some help from you, made my blog, called, at KaterineBomer.com. I only have two posts up there so far, but my vision for this place is for it to be a resource for teachers, a resource ... I envision teachers sending me stories from the classroom when they try essay, photos of their charts that they use with their students, and especially, of course, samples of essays that they might write themselves, and essays that their students write. That's what I'm really looking forward to.

Like, I can imagine, for instance, in September or October, putting out an invitation for teachers to send me some samples of kids' notebook writing for an essay. Then, I might have another blog post where I say, "Send me an example of a place in a draft of an essay where a student revised to make it better." I'll just put up that little revision piece right there, right? An ongoing place for teachers to ask questions, to submit things, and really interactive. That's my hope and dream for KatherineBomer.com 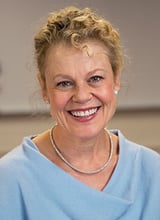 Katherine Bomer, author of The Journey Is Everything, Hidden Gems, and Starting with What Students Do Best, is one of the field’s most gifted writers as well as one of its most gifted teachers of writing. In more than two decades of teaching and consulting, she has used her writers’ eye to focus on how craft isn’t just an instructional goal but an instructional tool that allows writers to grow well beyond the range of most publicly available assessments. An internationally-known consultant and frequent keynote speaker, Katherine began her consulting career with the Teachers College Reading and Writing Project. In addition to Writing a Life, she is the coauthor of the Heinemann title For a Better World (with Randy Bomer) and delivers on-site PD through Heinemann Professional Development Services.

A published poet and essayist, Katherine is also coauthor (with Lucy Calkins) of A Writer’s Shelf. She began over fifteen years ago as a professional developer with the Teachers College Reading and Writing Project. A classroom teacher for ten years, she now works with teachers in elementary and middle schools throughout the country. As a frequent speaker at conferences and institutes, she combines a teacher’s practical advice, a writer’s love of language, and a powerful plea for social justice.