Habits of Mind: What Are They and Why Do They Matter?
END_OF_DOCUMENT_TOKEN_TO_BE_REPLACED

Habits of Mind: What Are They and Why Do They Matter? 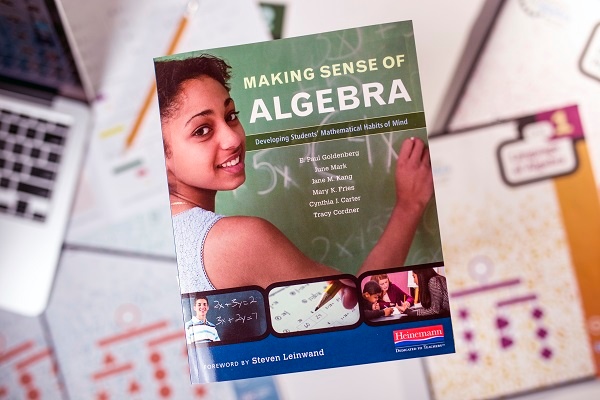 Wouldn’t it be great if your students expected math to make sense?

In Making Sense of Algebra, Paul Goldenberg, June Mark, and their colleagues look carefully at how our students think about mathematics. They explore five “Habits of Mind” that focus not just on the results of mathematical thinking, but on how proficient students do that thinking.

Over the next few weeks, we’ll unpack each Habit of Mind—providing explanations and ideas that will help you start incorporating them into your instruction:

In today’s blog, which is adapted from the book, the authors talk about the Habits of Mind as a whole and why they matter in our instruction.

Habits of Mind: What Are They and Why Do They Matter?

The ability to solve new and unforeseen problems requires mastery not just of the results of mathematical thinking (the familiar facts and procedures) but of the ways that mathematically proficient individuals do that thinking. This is especially true as our economy increasingly depends on fields that require mathematics.

In fact, changes in technology, economics, suppliers, regulations, and so on mean that even traditional businesses—not just high-tech start-ups—frequently encounter brand-new problems to solve, ones for which no method, formula, or procedure has already be invented. When the real world throws us a problem, it never asks what chapter we’ve just studied!

The I-can-puzzle-it-out disposition—the intrepid readiness to tackle problems with only the knowledge one has or can find and without a prelearned solution method—is an important starting place. Mathematical proficiency depends also on other mental habits that dispose one to characterize problems (and solutions) in precise ways, to subdivide and explore problems by posing new and related problems, and to “play” (either concretely or with thought experiments) to gain experience and insights from which some regularity or structure might be derived. And there are still other habits of mind: a readiness to seek and articulate underlying structure that might relate new problems to ones that have already been solved, to choose approaches both strategically and flexibly, and so on.

When the real world throws us a problem, it never asks what chapter we’ve just studied!

These habits of mind (and others) characterize the practice of mathematicians, but their utility extends well beyond mathematics. The I-can-puzzle-it-out perspective and all of its supporting habits of mind are necessary foundations for science, medical diagnosis (or diagnosis of a computer or car), law, economics, inventing a business plan, the building trades, and essentially all inventive or investigative work and critical thought.

The idea of using mathematical habits of mind as an organizer for the curriculum has been around since at least the early 1990s, but even then the idea wasn’t new. Mathematicians and good educators have always known that mathematics is more than the results of mathematics: more than the ideas, facts, methods, and formulas that are the content of math books and classes.

Mathematics is also about the ways of thinking that generate these ideas, facts, and methods. For people who are proficient at mathematics, these ways of thinking are “second nature,” habits, which is why we refer to them as habits of mind.

What Are Mathematical Habits of Mind?

If the name is to make sense, a mathematical habit of mind must reflect how mathematicians think, and must also be a habit. A habit of mind, then, is a way of thinking—almost a way of seeing a particular situation—that comes so readily to mind that one does not have to rummage in the mental toolbox to find it. Acquiring a habit may require a fair amount of experience doing things self-consciously, just as learning to drive is self-conscious before it becomes habit and fluid and natural.

There are three things to know about mathematical habits of mind in general:

2. Even though some habits of mind are nearly universal in this discipline, not all mathematical thinkers think the same way, so one cannot make a list and declare that “this is how mathematicians think.”

Building strong mathematical habits of mind in students is a way of bringing coherence and meaning to mathematics. It also brings texture to the subject, highlighting significant insights over convention and vocabulary. Students learn that they can use their experiences to build habits—ways of thinking about and approaching problems. They move away from the belief that mathematics is a set of arbitrary rules and procedures to apply and begin to see mathematics as being about making sense of and solving complex problems. 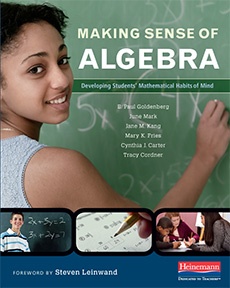 Click here to learn more about Making Sense of Algebra.