In Part 1 of her blog, Linda likened guided writing to guided reading in that they both focus on a learner's needs and take place in small, flexible groups. She also offered suggestions for how to fit guided writing into the daily classroom schedule. In Part 2, Linda offers sample lessons that show specifically how she works with students to lift the level of their writing. 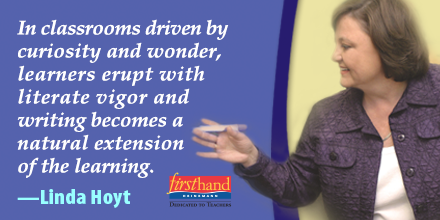 Vignette 1: Guided Writing as an Extension of Guided Reading

Marcella, Stephanie, Malo, Joey, and Megan have been reading about westward migration during guided reading. Their discussions have been rich with connections to the social studies unit we are studying as a class. I decided to shift them from guided reading to guided writing to take advantage of the rich descriptors in the guided reading text. The language of this text is laden with colorful descriptions and interesting sentence patterns, both of which were much needed in these students’ writing.

I explained that we are revisiting the book they have read, not to look at content, but rather to look at the writer. I requested that they reread page 4 and prepare to make observations about the writer’s craft, especially the descriptions and the way sentences are structured.

From page 4, Joey read, “They created maps, charted rivers, identified plants and animals, and brought back tales of harsh weather and beautiful land.” Malo volunteered to share first and observed that one of the reasons he had really liked reading this book was that he could imagine the activities. The book was written so that he could make a movie in his head and understand what was happening.

The other students agreed and set about finding additional examples of places in the book where the author had used lists of actions and interesting descriptions to stimulate visualization for the reader. They concluded that the sentences that listed actions, separated by commas, were very powerful.

Our next step was to turn to the writing they had been doing on westward migration. Each student had a different topic under development. Our challenge in guided writing was to apply what we learned from this author to our own work. They started in pairs helping each other to look for spots in their writing where the strategy for listing actions could be used.

As I closed the guided writing session, I asked them to summarize what they had learned and explain how they would use that understanding in their writing.

As in the previous vignette, I made a note to myself to check with them the next day and invite them to present a group minilesson for the rest of the class as this writing strategy was one not yet covered for the class at large.

John, Alecia, Alvarito, Shandrea, and Alad lean in closely as I show them the leads in four of my favorite informational picture books. As the students observe, I point out the way the authors have tried to pull me into their texts with first person language such as “Please notice that…” or “Did you know that…” or opening with a question.

I had presented several whole class minilessons on strategies for pulling the reader into informational writing, but these five students continued to develop pieces that read like lists of facts. They would benefit from the increased intensity of a guided writing group on this topic.

As I continued to point out strategies used in these books, I noticed that Alad kept leaning in closer and that Shandrea was totally focused on the language. These are students who are easily distracted and often sit at the back of the sharing circle, yet in the small guided writing group, they were totally connected.

My next step is to show the students a piece of my own informational writing, which I had placed on a sheet of chart paper. I read it and did a think-aloud about how to improve the lead and make it more appealing to a reader. While thinking aloud, I explored the use of questions to open paragraphs and showed the writers how I could change my piece by beginning with a question, such as, “Do bats have belly buttons?” Ultimately, the students assisted me in drafting my new, more inviting draft and were eager to dive into their writing folders to add some life to their own work.

The group lasted about ten minutes, but we accomplished a great deal. As they left the table, I made a note to meet with them again the next day to check on their progress and invite them to share their changes with each other. I also made a note to give these students an opportunity to share what they had learned and their ensuing changes during our sharing circle for writing.

Six eager kindergarten faces shone with excitement as they joined me around the table for guided writing. I had selected these students as a temporary guided writing group because they were still focusing on drawing and were producing very little writing even though I continued to do modeled writing every day.

I modeled how to stretch out a word and say it slowly while writing the beginning and ending sounds. I also reminded them to use picture-alphabet cards, which were on the table, so they could find the picture clues to match the sounds they could hear. We practiced stretching several words. I had modeled these behaviors in whole class sessions, but the intimacy of the small group really helped these writers engage.

Once I had given the group a strategy for writing words, I wanted to give them something concrete to spark ideas. So, next I passed out photos that I had taken the day before of these students doing cross-section drawings of pears and oranges. I asked the students to place their photograph on a piece of writing paper and create labels for the things they could see in the photograph. It worked! They were each able to label several items from the photograph, using at least beginning and ending sounds. And, they started drafting sentences! Thanks to guided writing and the boost in confidence it provided, these students now see themselves as writers.

Guided writing, like guided reading, must reside within a rich culture of language and informational explorations. The teaching done in guided writing is based upon the broad range of experiences children have in modeled writing, shared writing, interactive writing, and personal writing. The groups are small and flexible. Teaching is targeted to explicit learner needs, and the emphasis is on the craft or process.

Linda Hoyt is a nationally recognized consultant who creates environments where engaged children are active participants in their own learning. She is the author, co-author, or editor of Solutions for Reading Comprehension, Revisit, Reflect, Retell, Updated Edition, Spotlight on Comprehension, Exploring Informational Texts, Make It Real, and Snapshots. In addition, she is the author of the Interactive Read-Alouds series and the Explorations in Nonfiction Writing series.

Explorations in Nonfiction Writing in the Classroom