Won’t Read Much if I Don’t Have Any Books: Poverty, Access to Books, and the Rich/Poor Reading Achievement Gap
END_OF_DOCUMENT_TOKEN_TO_BE_REPLACED

Won’t Read Much if I Don’t Have Any Books: Poverty, Access to Books, and the Rich/Poor Reading Achievement Gap 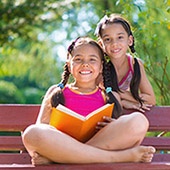 In this article from the Heinemann Digital Campus, researchers Anne McGill-Franzen and Dick Allington explain the phenomenon of summer reading loss and offer practical solutions.

Won’t Read Much if I Don’t Have Any Books: Poverty, Access to Books, and the Rich/Poor Reading Achievement Gap
Richard L. Allington  and Anne McGill-Franzen
University of Tennessee

The main research evidence that critics of our schools, especially those schools serving many students from low-income families, ignore is the evidence that poor children learn as much during the school year as middle class students. Yes, research indicates children from low-income families learn as much every year as middle class kids! Yet year after year their test scores reflect a growing achievement gap when compared to those students from middle class families. How can it be that teachers in high-poverty urban schools are as effective as teachers in schools serving students in suburban communities if the annual test scores suggest an inadequate education is being provided in high-poverty urban schools?

Poor kids don’t read because they own few books and live in neighborhoods where there are far fewer outlets where books or magazines can be purchased when compared to middle class neighborhoods. Finally, even public libraries in high-poverty neighborhoods are rarer and when present have more restricted hours of operation.

Couple all this with the fact that schools that enroll mostly low-income children have smaller and more restrictive school libraries and that classroom libraries are less common, and when present, have fewer books for children to borrow. What we have then is a near perfect recipe for creating summer reading setback.

Summer setback is when children who don’t read during the summer return to school behind where they were when they left for summer vacation. The best estimates provided by researchers indicate that children from low-income families lose roughly two to three months of reading achievement. Middle class children actually gain about a month every summer.

What all this means is that most school efforts at improving the achievement of low-income students have been aiming at the wrong target. It isn’t that schools with many low-income children are staffed by ineffective teachers. Instead, it is that teachers in low-income schools must produce three to four months additional growth every year compared to teachers in middle class schools, just to keep academic growth even with middle class kids. This added growth is needed to wipe out the effects of summer reading setback.

There is another option that schools should consider. We ran book fairs in seventeen high-poverty schools for three consecutive years. Randomly selected students were chosen to attend the book fair and select twelve to fifteen books to read during summer vacation. Other children were randomly selected to be the control group. The control kids did not participate in the book fairs.

We tested the children when they were in first and second grade when we began the study. After three consecutive summers we used the results of the state reading achievement assessment as our posttest. The children who received summer books performed significantly better than the control group children on the posttest.

We found that providing children from low-income families with free, self-selected trade books for summer reading eliminated summer reading setback and added a bit of reading growth (about a half year of growth across the three years). This effect was as large as the effect of attending summer school or attending a school using one of the federally funded schoolwide improvement projects! The effects for the poorest children, the free-lunch-eligible children, were twice as large.

I would explain the effects of our book distribution primarily by reference to self-teaching theory. Central to this theory of developing expertise is “deliberate practice.” This is voluntary practice and has been shown to be a powerful factor in developing expertise of many types (e.g., playing the cello, playing basketball, playing chess, and so on). In other words, children who voluntarily practice the cello will become more expert cello players than children who do not practice, even if both participate in the same cello lessons. In addition, children who practice the cello ten to fifteen hours each week will become better cello players than those children who only practice three to five hours each week.

The idea that practice develops expertise is commonly accepted by almost everyone I’ve ever explained the idea to. Even the old proverb, “practice makes perfect” reflects our understanding of the principle.

Somehow, when it comes to reading proficiency though, it seems as if almost everyone has forgotten this principle. Consider that the Put Reading First booklet distributed by the federal agency, National Institute for Literacy, noted that rather than having students read during the school day, teachers should encourage them to read at home. But if students have no books at home, attend schools and classrooms with few books, and generally have few role models of readers outside of school, what chance is there that they will engage in voluntary reading?

In the end, educators can stimulate voluntary reading by simply making interesting books easily accessible to children from low-income families. This is a cost- effective, easily implementable, and proven school improvement strategy. Unfortunately, it is also a strategy that seems to have failed to make the school improvement agenda. It is far past time for schools to put easy access to interesting books on the school reform agenda, particularly as it’s been proven effective in closing the rich–poor reading achievement gap.

Notes: The citation for the original research report on the summer books project and two of our recent books on implementing similar projects:

Recognition our study has earned, so far:

This study earned the research team the Albert J. Harris Award from the International Reading Association. This award is given annually for the study that best expands our understanding of reading and learning disabilities.

The Coalition for Evidence-Based Policy has awarded our study the “Near Top Tier” ranking. Noting that a second study done in a different region with different children needs to be done to earn the Coalition’s highest ranking, Top Tier Evidence. We are currently seeking funding to support such a study.

All About the Complete Comprehension: Expansion Packs for Fiction and Nonfiction

Super Powers: A Favorite Unit Gets an Update

In teacher Katie Wears’ kindergarten classroom, students have to earn their cape—literally. As a culminat...
Nov 2, 2022 8:00:00 AM