What is a Writer’s Mindset? by Chris Hall
END_OF_DOCUMENT_TOKEN_TO_BE_REPLACED

What is a Writer’s Mindset? by Chris Hall 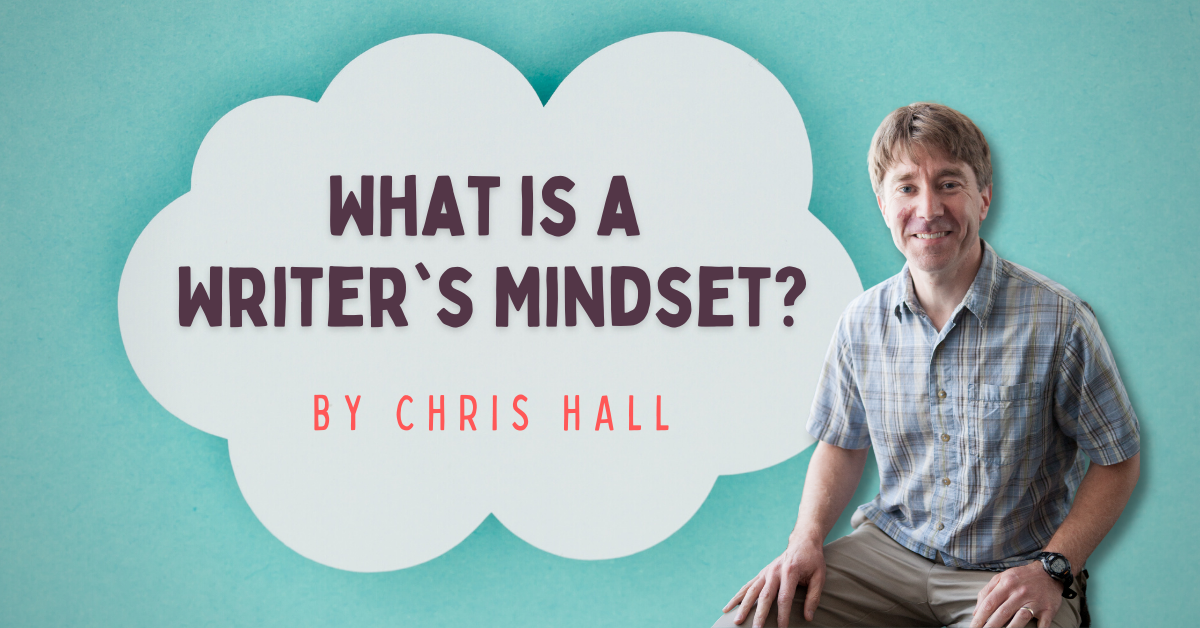 When I looked at my students at their best—and at my own experience as a writer—I realized that revision was occurring throughout the writing, not just after the end. I saw it happening with my students throughout drafting—in micro- and macro- changes that writers were trying before, during, and after composing each line. Writers were stopping periodically to review and reread their words, making adjustments big and small along the way.

There was also something that didn’t sit right with the whole approach of writing process and workshop. There was certainly nothing wrong with teaching students that writing is a process (i.e., prewriting, drafting, revising, editing, publishing) and showing them the structures of the workshop model (e.g., minilessons, conferences, shares, and predictable writing times). The problem was where these approaches focused my gaze as an educator. The way I had been taught writing process and workshop put my emphasis firmly on the writing. It seemed to me that there were things to be learned at the other end of the pencil—in my students themselves.

When I saw my students embracing revision, it wasn’t just that they knew craft moves and had learned certain writing skills (important as those are). It was their willingness—and even enthusiasm—to revise. To identify lines that were working and build from them. To be aware of their own reactions as they were writing, not just at the end of a draft. It was their openness to a new approach or tendency to take the perspective of a potential reader. Their ability to transfer one skill they had learned to a completely new genre or draft. Their willingness to take a risk in order to stretch themselves as writers.

I felt like I was stumbling upon a new definition for revision, by gazing at the students right in front of me. Revision was about what was happening in the mindset of the writer, during the writing process, not just on the page, after it was done.

Unpacking a Writer’s Mindset
Influenced by the mindset research of Carol Dweck and the Habits of Mind work of Arthur Costa and Bena Kallick, I began to notice and name the behaviors my students were showing when we were in the thick of a culture of revision. I was drawn to the term stance—coined by Kristine Mraz and Christine Hertz in A Mindset for Learning—because it implied a behavior my students could adopt, not a fixed, innate quality they either had or didn’t have. Like a ready stance in baseball (knees bent, glove out, eyes on ball), a writing stance indicated a conscious choice, a way of approaching revision that we could learn and practice until it became a part of us. Motor memory for writers.

But which behaviors—which stances—were most important for moving us beyond revision resistance? After I distilled elements from the Habits of Mind and other work, the key parts of a writer’s mindset revealed themselves. Following are the stances that emerged in my classroom and students when we were at our best, our most productive—energized and open to revision.

Metacognition
Some students were aware of the decisions they were making in their drafts— what they were trying (their writing moves) and why they were trying them (their intentions). They were willing and able to see their writing, and their reactions to it, clearly and honestly—paying attention to what felt right and what sounded off in their emerging drafts. To the places in the writing that energized them or fell flat. To the lines that would be intriguing or confusing.

I could see metacognition in my student Alja, as she was thinking out loud about her personal narrative: the mortifying time when she threw a snowball in an airport parking lot and it went awry, nearly causing her family to miss a flight. Alja was uninspired by her first lines and felt they needed changing. She was pausing middraft to weigh the words of her initial lead—the effect they would have, the order in which she should present them, how much information to dole out to readers.

Not only did Alja create a stronger lead, but her metacognition—her self-awareness about her writing during the process—would be a resource for her to use again and again, a little voice she could listen to and learn from.

Optimism
Some students were drawn to the strengths of their draft (rather than focused on its shortcomings) and built off what was already working. This optimism helped propel them forward through the hard work of revision. In looking at the positive aspects of their writing, these students often stayed hopeful, engaged, and persistent—even when they hit difficult spots in the process.

For example, there was Elly, whose quiet optimism shone through even as she struggled to describe an oyster shell for a nature poem she was writing. She read her drafts to peers, listened to their comments, and kept trying to look at her shell with new eyes and fresh metaphors.

The optimism I saw in students like Elly wasn’t some chipper, Pollyannaish attitude, but a tendency to invest their energy in what was working and to build from it. The persistence I witnessed wasn’t white-knuckle tenacity—some show-grit-through-the-misery approach—but a willingness to work through the challenges of revision because the writing was worth it.

Perspective-Taking and Connection with the Audience
I also noticed the students who could readily step into their readers’ shoes—to see their own writing from another perspective. They anticipated what their imagined audience might need or feel while reading their draft—the places where they might be confused, the background information readers would need for clarity, the details that would be most intriguing to them. These students predicted their audience’s reactions, and they listened carefully to the actual feedback they received from readers during conferences. These were writers thinking like readers.

Perspective-taking was what made Shreya rethink what her script for a social studies presentation on Pearl Harbor needed. Her draft was written in first person—from the point of view of an American soldier facing the surprise attack—but she felt like her lines were too informational. Thinking like a reader, Shreya reflected that her script was overpacked with facts but emotionally empty. She stepped into the shoes of her soon-to-be audience, spurring some important changes to her script.

Flexible Thinking
I noticed students who would hold off on saying, “I’m done,” who remained open to new ideas, approaches, and feedback. They showed a curiosity and confidence to try something novel with their writing—and a humility to recognize these great ideas might come from others.

Perhaps none of my students showed as great a change in flexible thinking as Lea. She started the year prickly and closed off when approached with virtually any comment about her writing. Teaching Lea reminded me what a vulnerable act writing is and how it’s no easy task for a writer to trust their readers. It takes time to build a relationship, and it takes feedback that’s truly supportive and helps writers to find their own way. Kids like Lea—all of us, really—need to know that revision doesn’t mean deference or submission, but a creative back-and-forth between fellow writers.

As the year progressed, Lea came to see revision as challenging but well worth the effort. Taking a more open stance and listening to other ideas was a gradual—and far from easy—process for Lea, but she came to see the value in it.

Transfer
There were students who were conscious of the wonderful writing skills and craft moves they had previously learned and were intentionally transferring these to new pieces and situations. For instance, Jack learned about adding interior monologue—a character’s inner thoughts—from one of his peers. Jack had read a piece by Alyssa, which included some conflicted and quite funny thoughts about agreeing to ride a terrifying roller coaster with her dad. After reading her story, Jack pinpointed what she had done (even if he struggled to name the craft move).

Jack then set out to use a similar approach in his piece about a scooter crash, a time when he misjudged a ramp at a skate park. To capture the moment when he had to decide whether to attempt a dangerous landing or leap off his scooter, Jack transferred his know-how about interior monologue.

Risk-Taking
Other writers play with fresh ideas and willingly take a risk to stretch beyond what they can already do. They allow themselves to be vulnerable, pushing the boundaries of what they’ve tried before—experimenting with new genres, narrators, story structures, endings, and more. Rather than rushing to complete a draft, they’re willing to live with uncertainty in order to play with possibility.

For some students, the biggest risk isn’t what they will add or change, but what they will remove. For Sarah, stretching herself meant trimming down her book review. “I had to cut out the parts that gave away too much information. . . . At first I had three pages and it was so hard to cut [anything] out. It was all so important!” Removing some of her writing to make it a more manageable length was a risk for Sarah, and she was proud of how her streamlined review seemed to hook other middle school students when it was posted in our library.

Metacognition. Optimism and persistence. Perspective-taking and connection with our audience. Flexible thinking. Transfer. Risk-taking. Do any one of my students—do any writers—display all of these stances, all of the time? Of course not, but these have become powerful guideposts for us to aspire to throughout the year. Teaching the stances cultivates positive behaviors not just in writing but in any pursuit. 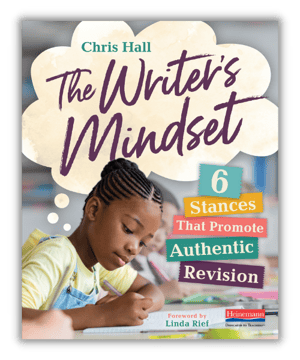 To learn more about The Writer's Mindset visit Heinemann.com. 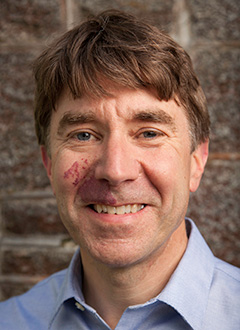 Chris Hall teaches language arts at Oyster River Middle School in Durham, NH. Over the past 20 years he has taught in urban, suburban, public, independent, and international schools, where he has helped young writers find authentic purpose, build community, and discover the power of their own words. Chris served as a Heinemann Fellow, researching innovative writing practices within a cohort of dynamic educators from across the country. 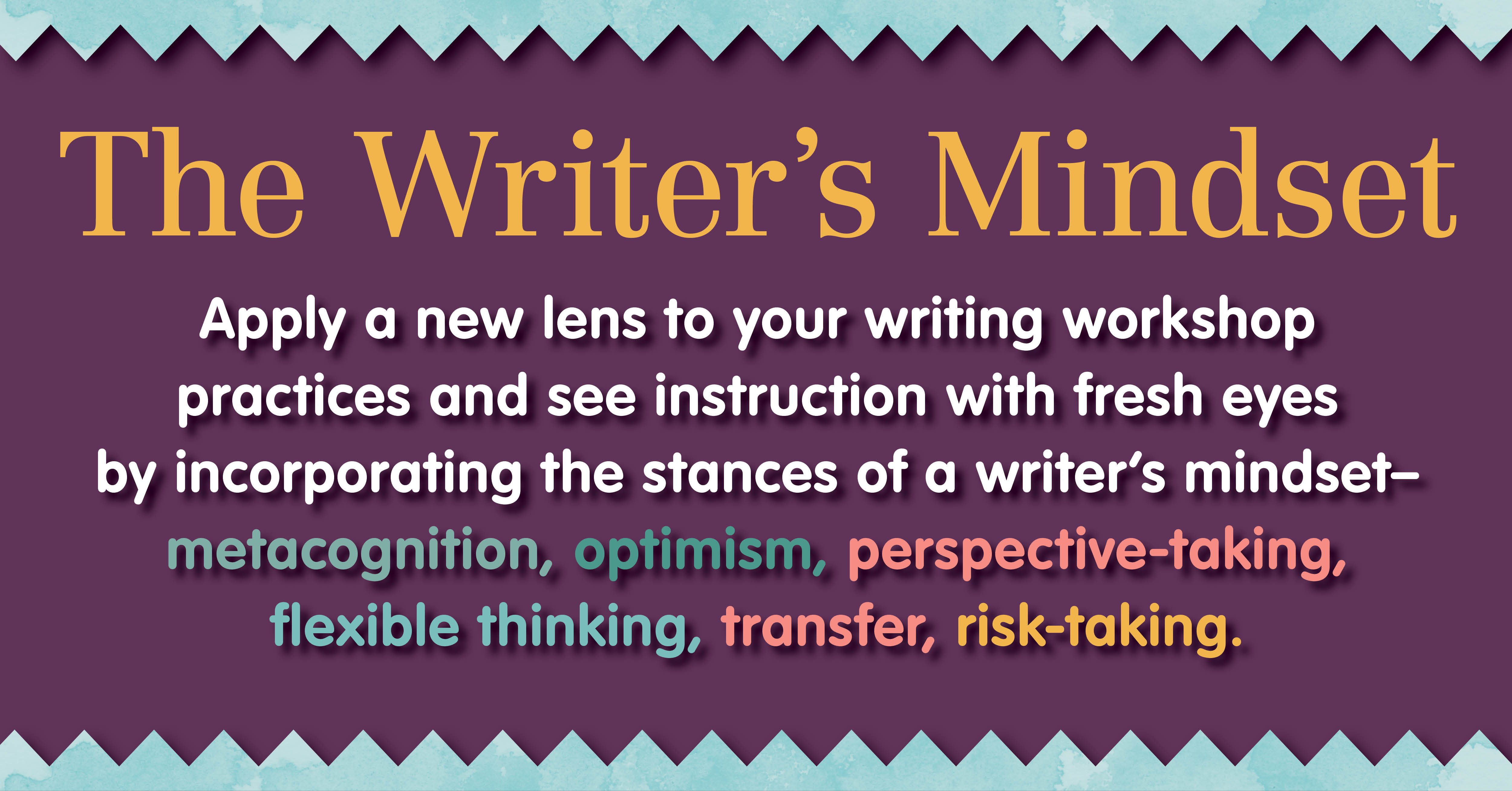 Podcast: Developing a Mindset for Revision with Chris Hall and Ellin Keene

The Writer's Mindset: Conferring Around Strengths