“How Are Things Working for You? What Do You Need?” - Supporting Students in High-Poverty Schools

As the superintendent (since 2012) of the Jennings, Missouri, urban school district (bordering Ferguson, Missouri), in which 100 percent of the students receive a free or reduced-price lunch, I’ve seen what can happen when we make it a habit to check in and connect with students and staff members many times throughout the day. Fostering a real sense of community defines our schools as more than buildings. We focus on what’s possible and communicate shared responsibility. It starts with the simple questions, “How are you? How are things working for you and what do you need?” How we respond, through words and actions, proves our desire to understand and address those needs.

It’s time we accept that schools are a place to address more than academic needs. The trauma inherent in a high-poverty environment—homelessness, violent deaths, and dealings with the criminal justice system—is not going away. At Jennings, staff members are trained in trauma-informed care, a structure that responds to all types of trauma that impact emotional, psychological, and physical safety and gives survivors and care providers a sense of control and empowerment (http://traumainformedcareproject.org/). Exploring social justice, poverty, and mental health issues helps staff members become more aware of their own emotions and biases. They learn how to choose their words and actions in ways that help children and themselves transcend difficulty (https://www.pbis.org/). We’ve learned how to identify and understand the context of a situation before reacting—never perfectly, human beings aren’t perfect—through systems that show us how to be better than we might be on our own.

One simple action that reinforces the relationships necessary for this work is the daily check-and-connect, providing reliable, coordinated care for each student and staff member:

Many schools create similar opportunities, but at Jennings staff members and students depend on these moments to solve problems. The “safety net” metaphor describes how we hope these systems will function. Too often the net is weak, relying on the strength of a single thread, and many students are not caught. At Jennings, each person, each system, reinforces the other so that the net can hold the weight of any child’s problem. If something is “off,” people know that someone will be there to help them. I won’t pretend that we’ve always had the just-right solution at the moment we notice something awry, but rather that we’ve shown care and paid attention and then followed through with some positive alternative to being stuck in difficulty.
The graphic below takes one specific challenge in a classroom and considers two outcomes, one in which staff members are isolated and another in which staff members and children have a real sense of accountability and of being supported by the other adults in the district.

The home lives of too many children today contain too much adversity for an individual teacher to handle alone, but we can handle it together. For schools to disrupt the cycle of poverty, we need to support healing and recovery. We can transform the culture of a school and children’s learning by focusing on positive behavior and continually assessing needs and successes. We know we’ve disrupted a negative cycle when children are able to advocate for themselves. 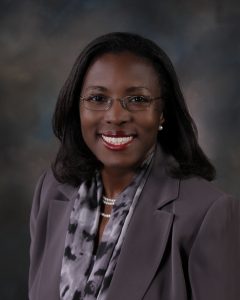 Dr. Tiffany Anderson has been a public school educator for 23 years and the majority of that time has been as a superintendent. She closed achievement gaps in rural, urban and in suburban public school districts.  The Washington Post and NPR referenced Dr. Anderson as, “The superintendent who made schools work for poor children.” After successfully serving as an assistant superintendent in the 23,000 Rockwood School District in St. Louis County which is accredited with distinction, Dr. Anderson was the first female and first African American superintendent in Montgomery County Public Schools in Virginia, a district that served 23 schools in 4 different localities. During her tenure, the district moved from having 7 schools accredited to having all schools accredited under her leadership and multiple schools were recognized under the Virginia Governor’s Competence to Excellence Award.  When Dr. Anderson moved back to Missouri, she led University Academy, a college prep charter, to accreditation with distinction. In July 2012, Dr. Anderson joined as Superintendent the Jennings School District, a district bordering Ferguson with 100% free lunch.  Under Dr. Anderson’s leadership, Jennings School District regained full accreditation, a distinction the district lost decades ago. Jennings is a national model of excellence in serving the whole child.  They improved from meeting 57% of state standards when Dr. Anderson arrived in 2012 to meeting 81% and reaching a 93% graduation rate.  On July 1, 2016 Dr. Anderson became the first African American female leading the 14,000 Topeka Public Schools, in Topeka, Kansas where the landmark Brown vs. Board case ended legal segregation.

Dr. Anderson’s publications include her book, Closing the Achievement Gap and her book Transforming Schools for Excellence and numerous articles.  Dr. Anderson’s recent work led to beginning the process of creating the first trauma informed school district in St. Louis, Missouri. Dr. Anderson earned her undergraduate degree, and later her doctorate, from Saint Louis University in 2001 where she met her husband, Dr. Stanley Anderson who is an accomplished OBGYN and robotic surgeon. Together they work to support children in having a healthy start so children can succeed in school. In 2016, Dr. Anderson received her second doctorate, the Doctor of Humane Letters degree from Eden Theological Seminary for her service to the community and society.  Dr. Anderson is adjunct faculty for ASCD (Association for Schools and Curriculum Development) and she serves on their 9 member national poverty cadre.  Dr. Anderson is a national presenter and among her various awards, in 2014, Dr. Anderson earned the national recognition from Education Week as one of the national 16 Leaders to Learn From. Dr. Anderson has also been awarded the Salute to Excellence for Women by the Urban League, the Person of the Year in St. Louis, the Stellar Performance award by the St. Louis American and the St. Louis Business Journal’s award for diversity in business as some of her recognitions. She is a lifetime member of the NAACP and is nationally known for her innovative work serving schools in high poverty communities and for her work with implementing trauma-informed practices that improve school communities.