Wynne Harlen’s new book, Teaching Science for Understanding in Elementary and Middle Schools, focuses on why developing understanding is essential to science education and how best to engage students in activities that deepen their curiosity about the world and promote enjoyment of science. In today’s blog, adapted from the book, Wynne talks about the important role students’ question play in building investigations that lead to the development of scientific inquiry skills.

There are several good reasons for encouraging students to ask questions. Curiosity and the desire to find out are important motivations for learning. For all of us, questions indicate the cutting edge of understanding, where we cease to be comfortable that our ideas enable us to make sense of certain experience and we need to seek further information.

Different kinds of investigations are needed to answer different kinds of questions that arise when students try to understand things around them. In all cases the first step is for students to engage with the question, which, although it may be raised by the teacher, has to be presented in a way that engages the students. By starting with a real question students gain ownership of the problem, and we can avoid a formulaic approach, such as with a work card offering a “recipe” for finding the answer.

Consider these five question types and how they can lead to investigations in your classroom:

This question leads to the type of inquiry that is most familiar to many teachers: the fair test. These inquiries involve the manipulation and controls of variables to make a test fair. The first step is to clarify what is to be observed or measured to make the comparison, that is, to put the question in an investigatable form. The inquiry then involves a good deal of thinking about how to compare the objects or conditions in a fair way so that only the effect of intended differences is observed and any changes are not caused by variations in other conditions. It is a good introduction to the concept of variables—things that change or can be changed.

These questions arise when there is a possible relationship between variables associated with the behavior of a thing or substance. Examples are the note produced by blowing across the top of a bottle with different amounts of water in it; the length of a shadow cast by the sun and the time of day; the number of turns given to a windup toy and how far it will go. These inquiries involve the same skills as inquiries concerning which is best because the effect of changes in one variable have to be tested fairly, with other variables or conditions kept the same. However, there is additional emphasis here on the interpretation of findings. In some cases there is a cause–effect relationship.

For instance, after finding that the tighter a string is on a guitar, the higher the note produced by plucking it, it is reasonable to conclude that tightening is the cause of higher notes. But there is need for caution; in some cases there may be another factor causing one thing to vary with another. For example, the fact that people with longer feet tend to be taller does not mean that one causes the other; there are other factors that link the two. So these inquiries can provide experiences that help students to distinguish an association between things from a cause–effect relationship.

These questions lead to inquiries into what happens, either as a natural process unfolds or when some action is taken. Examples are seeing eggs hatch; raising butterflies or silkworms; observing the expansion of water on freezing; seeing what things dissolve in water. Usually these concern the behavior of particular living things or substances rather than comparison between things. Following is one example of how using technology provides opportunities for students to understand the needs and processes of living things.

Despite their rural location, the second-grade students in Sally’s class were unfamiliar with the diversity of life around them. To help raise their awareness and sensitivity toward living things, Sally set up a bird box in the school grounds with a micro camera placed in it linked to a monitor in the classroom. When the monitor was switched on it became another window in the classroom. The students were able to watch in real time the activity of the bluebirds that set up home in the box. Students were able to record the nest building, egg laying and hatching, and feeding of the fledglings. They and indeed the whole school community were entranced by what was going on in the lives of the birds but that was otherwise unknown to them.

The inquiry in this case involved gathering evidence by careful observation to understand what was going on and building up a stock of personal experiences needed to make sense of later experiences.

The first step in answering these questions is to consider possible reasons why and then to test them out.

Students will have some ideas about what causes these things and should be encouraged to think of possible explanations (hypotheses) based on what they know. It may be possible to test out possible explanations by investigating the phenomenon directly or by using a model, as Lisa’s students did in answering the question of why we have day and night. But in some cases finding answers will involve using secondary sources—searching the Internet or reference books—which may stimulate further investigation at the same time as making students aware that they can collect data in different ways.

These questions may lead to inquiries where the end product may be an artifact or a construction that meets particular requirements—a model bridge that will support a certain load, for example. These are problems addressed by engineering and technology though involving many scientific inquiry skills and ideas. It is not necessary to make a clean distinction in students’ activities between science and engineering or technology, for they will merge into each other. But it is important for the teacher to be aware of the difference and of the particular learning that can be developed through engineering activities (devising solutions to problems) and through scientific activities (understanding and explaining how things in the world work). 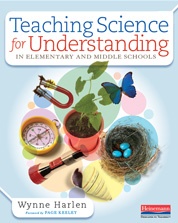 Wynne Harlen has spent a lifetime as a teacher, researcher, and author in education. She is a Visiting Professor at the University of Bristol, editor of Primary Science Review, and a consultant to various science projects in the United States and United Kingdom.

Click here to discover more about Teaching Science for Understanding and to read a sample from the book.

The Heinemann Teacher Tip App is available as a free download for iOS and Android devices. This app deliv...
Digital Editor Sep 25, 2015 12:23:59 AM