Our Responsibility as Educators: Lily Eskelsen García’s Foreword from Elevating Equity and Justice 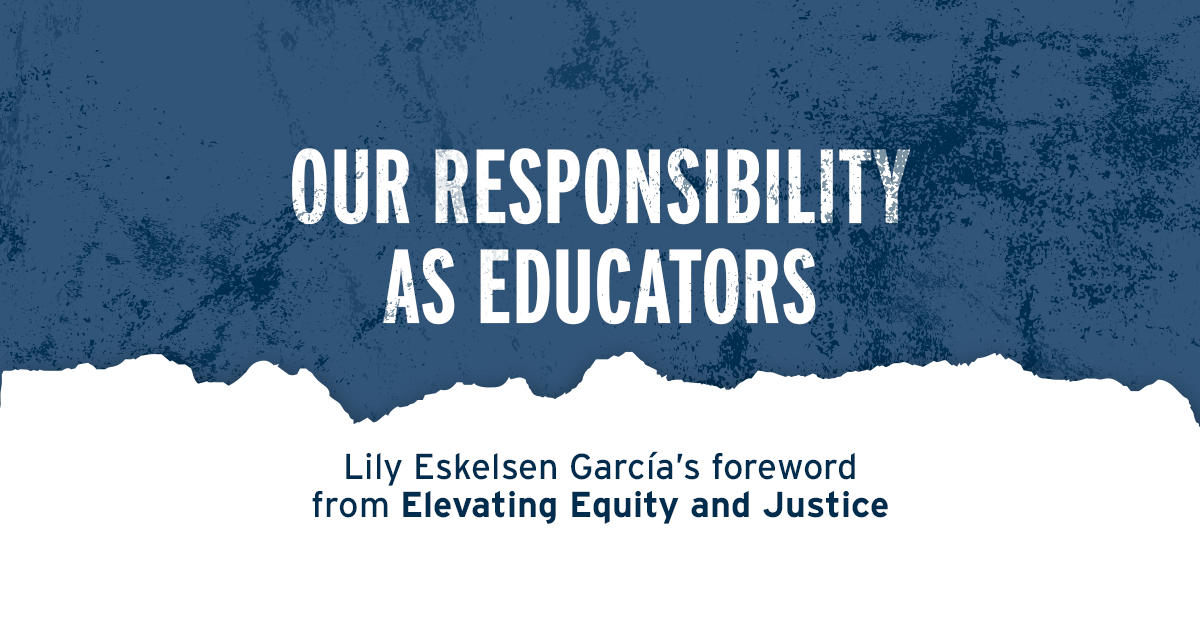 The following has been excerpted from Elevating Equity and Justice: Ten U.S. Supreme Court Cases Every Teacher Should Know by Robert Kim.


Whether you’re a teacher, administrator, parent, or activist: I know you’re busy. I don’t care. Put down what you’re working on and pick up this book.

I say this to you because everything we hope to accomplish to make our schools gateways to opportunity is in danger. And part of the danger is not knowing all we need to know about the basic legal rights (from the U.S. Supreme Court) of our students and what’s happening to erase those rights.

The pillars and pronouncements of the Supreme Court may seem a long way from our classrooms. But they’re not. Metaphorically speaking, we’re right there, just steps from the highest court in the land. Like a double helix of DNA, the law is closely intertwined with the lives of educators—including my own.

Take Brown v. Board of Education. Nearly seventy years ago, Chief Justice Earl Warren wrote, “in the field of public education the doctrine of separate but equal has no place.” With this sentence, the Supreme Court confirmed once and for all that all students, no matter their race, had a right to an equal education under a shared roof.

These words changed the course of history and opened the door of opportunity to generations of students of color. They also enabled me, a Latina woman, to become a teacher in a classroom with students of many races and eventually a leader of the largest labor union in the United States.

It’s no coincidence that many of our nation’s most iconic court cases involve schools. After all, equal opportunity is one of this country’s most cherished founding principles. It follows that instilling equal and basic rights in education is essential to our democracy. Children not only need to learn about equal educational opportunity, they need to experience it.

In fact, I’ve often thought—along with pedagogy for reading, writing, and ’rithmetic—that all aspiring teachers should have classes in the basic legal rights of students and the responsibilities of educators and school systems to protect those rights.

Our responsibility as educators, however, goes beyond simply knowing about and respecting students’ rights. As they say, knowledge equals power. To read about the landmark Supreme Court cases involving education and civil rights is to be reminded of the chasm between courts and classrooms, between principles and practice, and between rhetoric and reality.

We have seen what fulfilling the promise of Brown looks like through the successes of students, yet, for too many children across the country, the promise of Brown is still just that—a promise. Students read about Brown v. Board of Education in their history books but often do not see its impact in the world around them.

As I ponder several of the perfectly selected cases in the pages of Elevating Equity and Justice, I find myself coming back to the same questions: What happened to Brown? Where are the principle Justice Warren articulated back in 1954? Where are they in the 2007 case Parents Involved in Community Schools, in which the Supreme Court held that public schools were constitutionally prohibited from taking certain steps to consider race as a factor in assigning students to school, even if a school district wished to make up for past discrimination against people of color?

As we witness the separation of undocumented parents and their children and the deportation of thousands of immigrants, what remains of the spirit of Brown and the 1982 case Plyler v. Doe, in which the Supreme Court said that schools cannot constitutionally deny students a free public education based on their immigration status?

And how meaningful is Brown’s concept of educational equality after San Antonio v. Rodriguez, the 1973 case in which the Supreme Court astonishingly told us that, while
“the grave significance of education both to the individual and to our society cannot be doubted . . . education, of course, is not among the rights afforded explicit protection under our Federal Constitution . . . nor do we find any basis for saying it is implicitly so protected”? Pause a moment to let that sink in. The Court is telling poor children and children of color that, in effect, they have to fend for themselves, that their Constitution cannot help them, and that it’s acceptable that their government gives thousands of fewer dollars per pupil to the government-funded schools they attend than it provides for schools attended by wealthy, white children. The inescapable truth is the equality and inclusion that Brown was meant to guarantee is not the current reality for our children. There are nearly 51 million children in public schools across the United States. For them, we must recognize that Brown is not a self-fulfilling promise—it is one that requires action each and every day. Education has to work for everyone, or it does not work for anyone.

By responding to the continuing inequity and injustice in our schools, Bob Kim’s Elevating Equity and Justice represents both a useful tool and a call to action. It recognizes that as educators with caring and committed dedication to our students, we have the unique power, ability, and responsibility to increase equity and justice in education and, in doing so, strengthen and preserve our democracy.

The cases and topics explored in these pages cover the landscape of civil rights and civil liberties in K–12 education and are especially relevant today as we struggle through an era in which they are front and center in our national and local headlines. I appreciate how Bob describes these ten blockbuster cases in an accessible way for busy teachers, and that he includes the voices and perspectives of actual school practitioners, who bring to life the connection between the law and the classroom.

Best of all, Elevating Equity and Justice reminds us that advancing equality and freedom is within our power. It’s not just about changing laws or policies or eradicating centuries of discrimination or oppression (although that would certainly help). It’s about how we treat our students, how we structure our lessons, what we encourage in discussions, and what we stand up for at school. We can do this.

If each of us is inspired by even one of the cases described in the pages that follow to take one positive action on behalf of a single student, then we will have collectively formed a new civil rights movement affecting millions. Now that’s exciting! 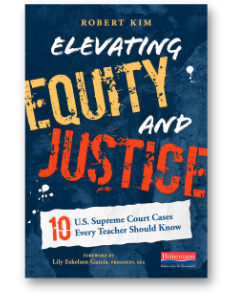 To learn more about Elevating Equity and Justice visit Heinemann.com.