In Part I, you met Lori Fulton and Brian Campbell in their roles as science educators and the authors of Science Notebooks. Today you’ll see how Lori and Brian have made the second edition of the book even more valuable: they reveal how science notebooks support implementation of the Next Generation Science Standards as well as the Common Core State Standards for ELA. 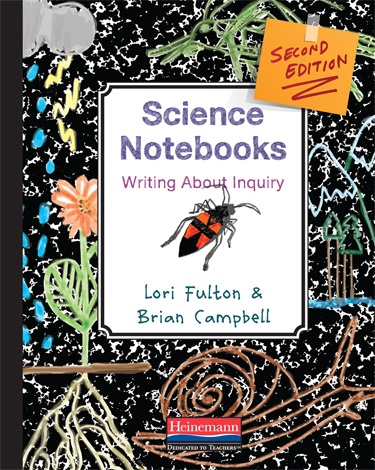 How does the use of science notebooks fit with the Common Core and other standards movements? (You discuss this in the book, but could you give a brief summary of how you see the fit?)

There is a natural link between science notebooks and standards-based movements like theCommon Core. Children need to read, write, and speak about—and listen to—something real; science can be that something real. When students are actively engaged, the science notebook is a tool for recording their ideas and making sense of their thinking; they can then refer back to the notebook for evidence to support their thinking and use that information to build a logical argument.

Many elementary teachers feel their schedules are squeezed and don’t feel they have time enough for science instruction. What would you say to those teachers?

Kids love science—there is nothing like watching a butterfly emerge before your eyes or feeling a surge of excitement as you mix ingredients that result in a chemical reaction. This is what excites students, makes them want to be in school; they need real experiences about which to read and write. As teachers, we want to capitalize on this excitement and move our students’ thinking forward. While it does feel as though science is being squeezed into smaller and smaller time frames these days, we hope the Next Generation Science Standards will push science back onto the stage with mathematics and language arts and make science an important part of the school day again.

What’s one of your favorite things you’ve ever encountered in a student’s notebook?

Every student’s notebook is different—and distinct. We can pick up a notebook and without looking at the cover know exactly whose it is. It isn't what a student does to remember content but what they do with that content on their own that intrigues us. One student maintained a running narrative during each investigation. Apparently, inaccurate directions were given at one point, because she wrote, "Had to stop experiment. Mr. Campbell messed up. Starting over." She felt free to record what was important to her as a learner. This freedom was very different from what either of us experienced as young learners but something we both thought was important then and think is even more important now.

If you could leave teachers with one message about teaching science and/or using science notebooks, what would it be?

Remember, it is first and foremost about science and about students’ learning. As teachers, we want to know what our students are thinking and what they are capable of doing. Too often, notebooks become a place to record what was done in science that day. The science notebook needs to go beyond what was done to what was learned. Once student thinking is represented in this way, the notebook becomes a learning tool both for the student and for us. Our goal is to use that information to take students further in their thinking.

Author Q&A with Lori Fulton and Brian Campbell, Part I