On the Podcast: Dynamic Teaching for Deeper Reading
END_OF_DOCUMENT_TOKEN_TO_BE_REPLACED

On the Podcast: Dynamic Teaching for Deeper Reading 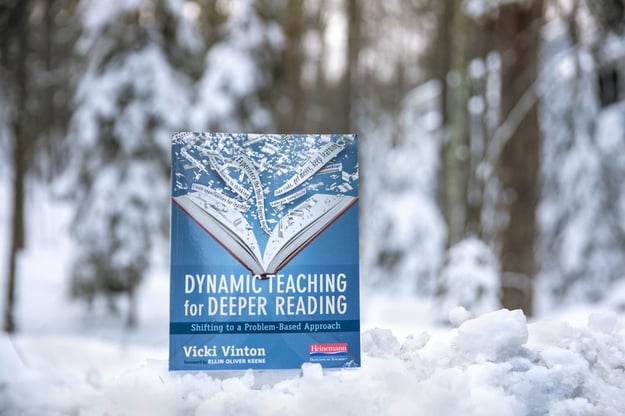 Today on the podcast: problem-based teaching. How do we prepare students for a world that’s changing so rapidly that a majority of those sitting in classrooms today will go on to hold jobs that don’t yet exist, using technologies that haven’t yet been invented to solve problems we don’t even know are problems yet? Author Vicki Vinton, says the answer is to help build students’ capacities as critical and creative thinkers by shifting to a problem-based approach for teaching reading. In her new book, Dynamic Teaching for Deeper Reading, Vicki connects the practices in the book to all sorts of current thinking and trends.

We recently sat down with Vicki to talk about her work. We started our conversation on what she sees as the need for a problem-based approach.

See below for a transcription of our conversation:

Vicki:    Problem-based teaching and learning is actually something that's been around for a while. I think it's taken hold in STEM classrooms, it's been a while there, in math classrooms for quite some time, but I think the concept of it goes actually all the way back to Dewey. Dewey once said, "Give the students something to do, not something to learn, and if the doing is such a nature to demand thinking, learning naturally results." The idea there is if we move away from teaching kids to learn a strategy, a skill, literary elements, text structures, but instead give them opportunities to figure things out, like a problem. I think that every text, the biggest problem it poses is what is the writer trying to show me about people and life and human nature. That that's the core of the idea.
I think there's all kinds of problems. A problem exists any time a writer says something implicitly instead of explicitly, and that could be from what the antecedent of a pronoun is -- which trips kids up lots, they lose track of who's saying who, what's going on -- to where something is taking place to how characters are feeling. All that are in effect problems to solve. Why did the writer choose to write it this way? What are they actually trying to tell us? I think we can set kids up in specific ways to try to solve those kinds of problems in ways that also tap into the whole notion of productive struggle, which I think, again, has taken root more in math than it has in literacy, beyond just suffering though exceedingly complex texts with grit.

Brett:    Does the Common Core approach to complex texts really prepare students for our complex world?

Vicki:    Yeah. That's something that I really talk a lot about in the book. Oh, to be blunt, I would say I don't think so. I'm not sure whether it's the Common Core standards themselves or the work that's come out, the thinking that's come out, around the standards, beginning with maybe the three or the sixth shifts of the Common Core standards, which are very focused on students learning content knowledge and building academic vocabulary.
I would say, and I share some facts from a fascinating video in the book that show that human knowledge is doubling at just such an incredible speed that it's absurd to think that we can know everything. In fact, let's see, 1900 human knowledge doubled every 100 years, and by 2020 it's going to be doubling every 12 hours. Right now it's doubling every 12 months. So the idea that we're spending time to teach kids content knowledge seems a little odd.
Also, the same video shares that we're currently preparing kids for jobs that don't yet exist using technologies that haven't yet been invented to solve problems we don't even know are problems yet. So I'm not sure content knowledge and vocabulary, while important, I'm not suggesting they're not important, but I think to develop kids' capacity as problem solvers, as critical and creative thinkers, as innovators, is ultimately going to be more important because no one can wrap their mind around that kind of content.

Brett:    I'd like to go back to feedback a little bit because sometimes we get into a place where we think we're giving good feedback, but maybe we're not. How can we examine our feedback and be better at it?

Vicki:    Somebody, I think his name is Dylan Williams, I hope I have this correct, and he talks about the difference between feedback being a postmortem versus kind of a medical check-up. The feedback that comes after everything is done, that's the postmortem. I think we need to be talking to kids as they're in the process of making meaning, solving problems, and figuring things out, and I think the best feedback we might be able to offer kids is just notice and naming what they're doing. "Oh, I see you're doing this. You've figured out who the first person narrator is. Are there other things that you think you might need to figure out?" "Mm, I see that you've been wondering, you've been thinking about this. Have you developed any theories?" To begin with just notice and naming what they are doing I think helps them see that the work they're doing now is applicable and transferable to work in every text. That, again, I think I offer some things that you can notice and name when you're talking with students to reinforce that.

Brett:    You have a feature in the book that identifies core practices.

Vicki:    One of the things that a problem-based approach does kind of demand of teachers is that they're able to think in the moment because it's not a scripted program. However, there are common practices that are the same no matter what you're reading, what grade you're teaching. things like some suggestions on how to choose a text, what makes a good text, how to asses how complex a text is, how to chunk a text. Also in terms of how to create purposeful turn in talks, how to create low-risk writing prompts that get kids thinking. They should not be graded, just get kids to think on paper just the same way we want them to learn how to think by talking and having conversations with each other. I think those practices are really something to hold on to, and to remember that they're useful all the time.

Brett:    Another feature in the book are the six "Considering Complexity" chapter interludes. What is the purpose of this feature, and how is it meant to help readers?

Vicki:    When I started imagining this book, one of the things I knew I was facing is that many teachers were eager to do some of the work that had appeared in "What Readers Really Do", and this book is certainly an outgrowth of that, but they didn't always have resources. What I wanted to do in those sections was to think about other kinds of problems that weren't covered in the chapter, and if you want to dig into this, either whole class, small group, or share it with a student in a conference on one-on-one, that you'd have some pointers and resources to go to, so some lists of texts.
For instance, one of the things kids struggle oftentimes figuring out is, what's the writer doing with figurative language? What does that figurative language actually mean? To do that, you need some texts that have great examples of figurative language, and so I've compiled a list at different levels for different grades of texts that are good to set kids up to think about, well, here's this figurative language, what in the greater scope of things do we think it means? Why is the writer saying things this way? What does it actually mean? All those features just offer some few tips, and very specifically, resources.

Brett:    What do you see as the biggest challenge teachers might face in adopting a problem-based approach?

Vicki:    At some point on a blog post I called this elephant in the room. I think the elephant in the room is the fact that many of us, including me, can be fearful of losing control, particularly in a classroom when you've got anywhere from 15 to 40 kids in a room. You're kind of opening the door in this approach to divergent thinking, to thinking that might have to undergo a process. It's not really answer driven, it's thinking driven. That does mean that you have to be willing to be vulnerable, and I have to say I'm here talking with you now at NTCE, and one of the things that I've noticed from the sessions I've gone is the word vulnerability keeps cropping up across sessions. We have to be willing to open the door to kids thinking, and we have to trust that the process will work itself out, but doing it first can be a little scary and I just want to acknowledge that.

Brett:    How's the landscape for the teaching of reading changed since you wrote "What Readers Really Do".

Vicki:    This is where we see how things are changing so fast. When Dorothy Barnhouse and I started writing "What Readers Really Do", I think the Common Core standards was, I think maybe it was more than a glimmer in its parents' eyes, but I think really it hadn't come out yet. We've gone through this wave of having everybody's thinking kind of have to shift to adjust to the Common Core, which in some ways has narrowed the way we think about teaching reading as it's become about meeting particular standards. Now it seems to me, as there's been pushback on the Common Core, and the fate of the Common Core right now is a little uncertain, we're seeing certain pendulums swing back again.
One that I love that actually has come out since I've written the book, there's a new call-to-action report that came out from a group, I'm not going to remember the name of the group, but it's called "What Matters Now". Linda Darling-Hammond is involved in this group, and they're really talking about creating a new compact around teaching and learning where the teacher is not so much the deliverer of information or the modeler of strategies, but the teacher is a learning designer who creates opportunities for kids to think and learn, and that's very much what this book is about. I think we're seeing the desire for that as we see that we're not always getting where we want to be through data-driven accountability measures. It's just not dynamic enough, and it's too focused on answers not thinking.

Vicki Vinton is a literacy consultant and writer who has worked in schools and districts across the country and around the world.  She is the author of Dynamic Teaching for Deeper Reading: Shifting to a Problem-Based Approach (2017), and coauthor of What Readers Really Do: Teaching the Process of Meaning Making and The Power of Grammar: Unconventional Approaches to the Conventions of Language.  Vicki is also author of the novel The Jungle Law. Additionally, you can find Vicki online, at the popular literacy blog To Make a Prairie (www.tomakeaprairie.com).

Teacher Appreciation: Vicki Vinton Thanks a Teacher Who Showed Her the Power of a Great Book

How to Begin the Shift to a Problem-Based Approach