How Teachers Can Lead on Neurodiversity by John Elder Robison
END_OF_DOCUMENT_TOKEN_TO_BE_REPLACED

How Teachers Can Lead on Neurodiversity by John Elder Robison 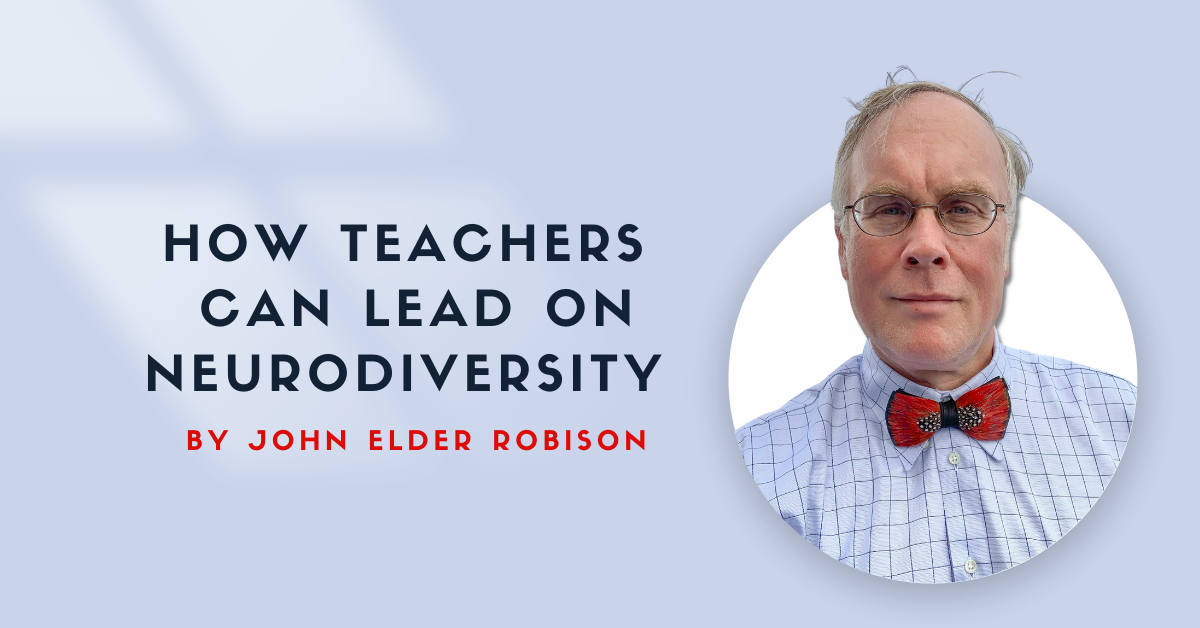 For most people, neurodiversity awareness starts with recognition of disability. Whether it is you, a family member, or a student . . . developmental differences are some of the most common forms of human diversity. While neurological diversity can confer a mix of disability and exceptionality, it is usually recognized in children as disability. Awareness of neurodiversity’s gifts comes later.

How can we make that awareness of the value of different abilities come sooner for neurodivergent kids and their classmates? The answer might lie with neurodivergent teachers.

Medical professionals have many terms for neurological diversity.  ADHD, autism, and dyslexia are three of the most common labels. One or more of them are bestowed on a child when they are evaluated after “failing” in some way at school. The problem may be behavioral, or organizational. It may even be environmental—such as a student who is overwhelmed by ordinary sounds or smells.

The medical label allows the professionals to assemble a plan to help the child succeed in school and, by extension, succeed in life. I am a recipient of such a plan. I have autism and spent countless hours in language therapy learning to perfect my speech. It felt humiliating at the time, but today my speech is clear and precise, and speaking has become one of my strengths. There are millions of success stories like mine through the history of special ed.

But there is a dark side to labels and special ed. There is stigma and shame attached, and kids feel it. When children move into special ed, they are often  mocked and bullied.

Kids internalize every criticism, and everything said to be wrong with them. They believe they are less than the other kids who do not have those labels.  Kids in this predicament have poor self-image and can be anxious and depressed.  I know that firsthand because I was one of those kids.  Teachers, both neurodiverse and neurotypical, have an opportunity to reframe neurodiversity in their classrooms and alter perceptions surrounding learning differences.

The diagnostic labels given to differently abled children are only one side of the coin: the “can’t do side.” Neurodiversity embraces the “can do” aspects, of which there are many.

When clinicians focus on a person’s disability, they can miss advantages the person may have in other domains. People with autism tend to be rational, logical thinkers. Sometimes that is exactly what the situation demands. People with ADHD can often juggle 10 things at once, better than people who do not have ADHD.  People with dyslexia (one of the more common learning differences) may see patterns non dyslexics miss because they process visual information differently.  Stated like that it is easy to see how people with neurological differences bring richness and value to any academic or work environment.

These neurological differences, often identified in childhood, do not go away. They are part of our adult lives. There is no cure and yet many of us learn to live and even thrive because of our differences.

1 in 6 of us is neurodivergent. Is it you? Are you a teacher? Imagine the positive impact you could have on neurodivergent students if they knew.

When I published my first book, Look Me in the Eye, I thought I was showing the world how it feels to be autistic.  Instead, to my amazement, I found that I had shown that people like me have the same dreams, hopes, and hurts as everyone else.  That is your entrée to these students just as it was for my readers and me.

There is no greater gift a child who has been told they have a developmental disability can receive than to be shown the extraordinary gifts they also possess. And there is no better way to show them than to witness someone with the same disabilities thriving in adulthood

The K –12 years are the hardest time for neurodivergent kids. If neurodivergent adults in their lives became role models to them, they would be delivering a priceless gift.  Whatever today’s pain, Neurodivergent kids can know there is hope and light tomorrow. Because to them—you have been there, and you are now thriving.

Check out another Heinemann blog on neurodiversity:
“What Every Teacher Should Know About Neurodiversity” by Mac Gander 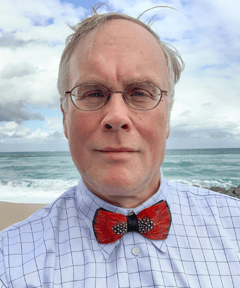 John Elder Robison is a New York Times bestselling author, and an autistic adult who grew up undiagnosed and wild in a world of machines. At 16 he was lord and master of a small tractor and a CDC3600 computer. By age 20, he had conquered more sophisticated devices while working for Britannia Row, Pink Floyd’s sound company, and KISS, for whom he designed fire-breathing special effects guitars. In search of greater challenges, he established a business restoring classic motorcars while developing a second career in performance photography.

Today John is also the Neurodiversity Scholar at the College of William & Mary and advisor to the neurodiversity institute at Landmark College. He is a neurodiversity advisor to the Lawrence Livermore National Lab and a consultant to SAP and other companies in the Autism at Work and Neurodiversity at Work initiatives worldwide. John has served on World Health Organization committees that maintain the standard definitions of autism and exceptionality for the world.

He lives in western Massachusetts with his wife Maripat, and a bulldog and an imperial Chinese war pug. Follow him on Twitter @johnrobison.

This week on the podcast, we’re celebrating Neurodiversity Week with a special interview on neurodiversit...
Mar 24, 2022 3:45:00 AM

What Every Teacher Should Know About Neurodiverse Learners

What Every Teacher Should Know About Neurodiverse Learners by MacLean Gander As a college educator in the...
Dec 14, 2021 8:51:59 AM