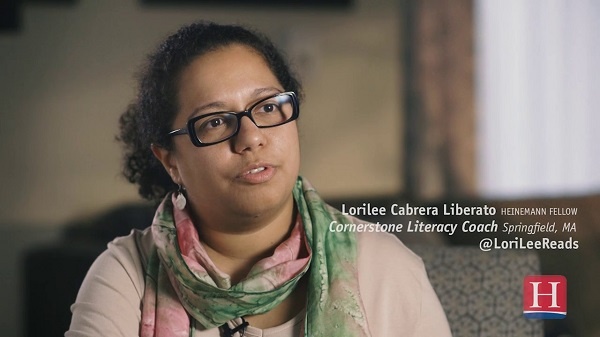 Lorilee Cabrera Liberato is a Heinemann Fellow with the 2014–2016 class, and has been an educator for 15 years. Today, Lorilee tells the story of how an intentional effort at multicultural literacy produced an engaged and strong community.

Picture this: An entire elementary school, children and adults, decked out in colorful costumes, holding a variety of homemade props, chanting clever phrases and proudly displaying their work on banners and posters. This celebration is the Fifth Annual Authors’ Parade, and the culmination of a month-long study of a variety of authors. The lively display of the students’ learning has become a tradition at Gerena Community School in Springfield, Massachusetts. As in years past, there were student displays for legendary authors such as Cynthia Rylant, Stephen Kellogg, Kevin Henkes, and Shel Silverstein. However, this year, there was something new, which caught the community by surprise: a vocal group of 3-, 4- and 5-year olds dressed as jibaritos and jibaritas (noble and humble mountain-dwelling peasants), singing traditional bomba and plena songs from the island of Puerto Rico, accompanied by local pleneros (Afro-Puerto Rican musicians).

These students had spent the previous month on a character study of Juan Bobo, a folkloric character known for being either a trickster or a foolish boy who can’t get anything right. They had engaged in group discussions of various Juan Bobo stories, talked and written about how he was portrayed, and learned about his adventures, where he was from, and how he was similar to and different from them.

Over 80% of students in the school identify as Hispanic, and many of their families are Puerto Rican. At the celebration, parents joined in the singing and dancing, and many wiped away tears as they saw themselves represented in a school event. As one teacher explained, “Se me aguan los ojos viendo a las familias y los muchachos tan contentos celebrando la belleza de su cultura. Muchas veces lo que ellos escuchan sobre los puertorriqueños son las cosas negativas. Esto les enseña que deben de estar orgullosos de lo que somos.” (“I tear up seeing families and kids happily celebrating the beauty of their culture. Many times the only things they hear about Puerto Ricans are the negative things. This shows them that they should be proud of who we are.”)

What Role Did Coaching Play in this Success?

This isn’t the first successful and fun Authors’ Parade the school has hosted, but it is the first to bring the entire school community—students, parents, teachers, and administrators—together, using a broader base of multi-cultural children’s literature. How did this happen? It began with a whisper.

Let’s rewind to a month before the parade. As in years past, teachers were asked to list several authors or characters they would like their students to learn about during the year’s last literacy unit. Because the majority of the students in the school are Latino, I suggested they also consider a list of Latino authors I found on the American Library Association website. When the team met to share their choices, a teacher who was sitting next to me and who is of the same cultural background as most of the students whispered, “Maybe we can study Juan Bobo.” The comment was lost in the shuffling of books and conversations about well-known authors, and the teacher didn’t repeat it. We were in a group that had been learning, planning, and making decisions collaboratively for years. And yet, at this moment, the teacher was not asserting her idea, even though it seemed that it was an idea she was interested in pursuing.

As a coach, I had to make a fast decision—how could I best be helpful in this situation? I decided to draw attention to her comment. Having her repeat her statement shifted the conversation to something the others in the group had not considered. Rather than directing the group with my own ideas, I asked the team to think about the impact of this on their students. The coaches led an engaged discussion. “Wouldn’t it be great for students to read and learn about where their families came from?” asked one of the coaches at the end of the meeting. The rest is history!

At first glance, this might look like serendipity, but it’s actually the result of work that the team had been doing together for months. I stress that this is the team’s work, not just mine, but I can name a few of the coaching moves that helped to make this situation possible:

The coaching team, myself included, already had a collegial relationship with the teachers, so bringing up the topic of cultural identity and asking the team to consider a new approach for their author study wasn’t as uncomfortable as it might have been if there were not an established trust.

The answer to every question we have about how to teach the culturally and linguistically diverse students of this particular school is in the minds of the teachers and staff who know them best. The coach’s job is to listen for the answer and bring it up to the surface for everyone to hear and consider.

When we talk about professional growth, we’re really talking about the beliefs and passions of teachers, who they are at their core. You can get to this by asking the tough questions:

The Effects of This Work: Engagement, Relevance, and a Stronger Community

At the end of the study of Juan Bobo, we asked teachers to reflect by answering questions about what the students learned, and how the experience impacted student and family engagement. Here’s an example of a teacher’s response:

As soon as we mentioned Puerto Rico, students showed interest and were very involved. I think that being able to make some type of connection with their learning was a big thing (80% of the class has Puerto Rican heritage). Throughout the study, students were engaged, and they shared connections and family input. The parade was a big plus to end the character study. I was able to experience the pride and joy in students’ faces. I saw students from upper grades dancing and singing. I saw families cheering when they heard the familiar music that brings them back to where they come from. They were able to experience something that connects them to the things they left behind. The character study could open doors to promote family engagement and to build community. I want to do more research on Latino writers. There are many more out there that we can use for our next study.

In another response, a teacher mentioned how this experience might lead to further growth in this area:

Teachers have commented on engaging in cultural studies representing the students we have, and having an event that embraces family and tradition. Others have expressed interest in looking at similar characters across countries as a character study in place of an author study.

The greatest responsibility a coach has is to be present: present in the relationships and present in every interaction. I have been extremely fortunate to be able to explore this role alongside a team of reflective and effective building-based coaches. Together we’ve built a community with a common goal: our students’ academic and socio-emotional well-being and growth. We understand the value we each bring to this experience and we show it by listening and being present. We aren’t afraid of having tough conversations and questioning each other’s actions and thinking. We embrace this role because when we are successful, everyone shines

Heinemann Publishing is seeking applicants to become part of our newest class of Heinemann Fellows, a small group of educators who exhibit exceptional promise for concentrated, enhanced pedagogy. 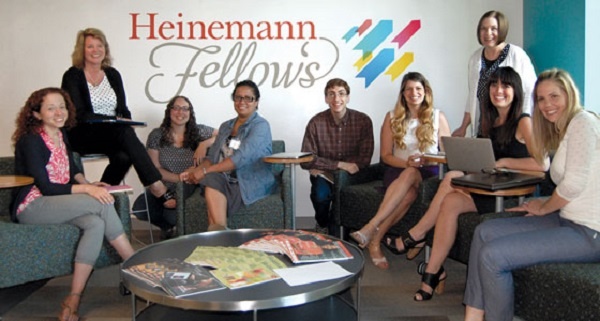 Lorilee Cabrera Liberato is a literacy coach in Springfield, Massachusetts. Her action research question as a Heinemann Fellow asks, "What coaching moves are most effective in promoting and sustaining _________ (changes in practice, a specific practice, use of school/ district resource)?"