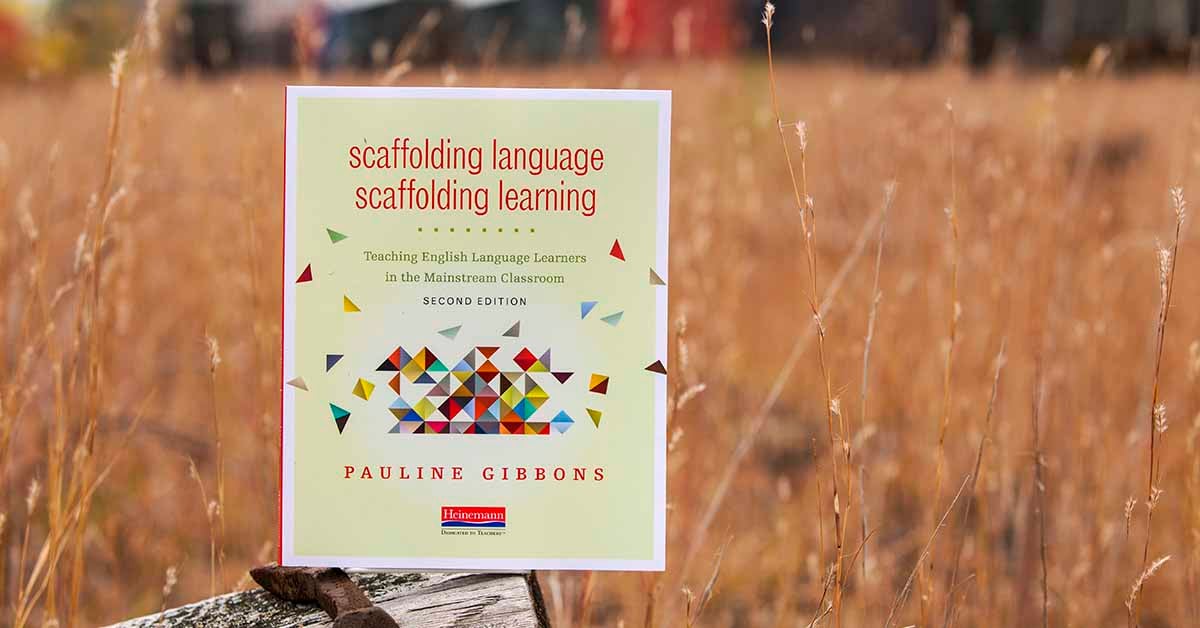 Author Pauline Gibbons' classic text Scaffolding Language, Scaffolding Learning is updated with a multitude of practical ideas for the classroom, supported by the latest research in the field of English Language Learners.  Gibbons says the second edition “is about the many ways in which teachers can provide support for ELs through the learning contexts they provide in the day-to-day life of the classroom.”  Gibbons also writes about a student’s potential saying “treating EL students as the people they can become means that we see students not in terms of what they lack - but as capable and intelligent learners.”

The theory of language on which this book draws is based on the work of Michael Halliday and other linguists working within systemic functional linguistics. These linguists argue that language is involved in almost everything we do, and whenever we use language there is a context, or, to be more precise, two kinds of context. There is, first, a context of culture: speakers within a culture share particular assumptions and expectations so that they are able to take for granted the ways in which things are done.

Knowing how to greet someone, how to order a meal in a restaurant, how to participate in a class, or how to write a business letter are examples of this kind of cultural knowledge. While cultures may share many common purposes for using language, how these things actually get done varies from culture to culture.

How we use language is determined largely by these contextual features. Here are some examples of  each of these three features.

The above has been adapted from Scaffolding Language, Scaffolding Learning by Pauline Gibbons. Learn more about this and other works at Heinemann.com

Pauline Gibbons taught postgraduate and undergraduate TESOL courses at the University of Technology, Sydney, for many years, and is now an Adjunct Professor at the University of New South Wales, Sydney. She is also an independent EL consultant and her work with teachers has taken her to Hong Kong, Sweden, Laos, Singapore, Indonesia, Thailand, China, South Africa, Marshall Islands, Iran, Germany, UK, and USA. She has published extensively in EL education, including Bridging Discourses in the ESL Classroom: students, teachers and researchers (Continuum, 2006), and two other Heinemann books: Learning to Learn in a Second Language (1993) and English Learners, Academic Literacy and Thinking: Learning in the Challenge Zone (2009).

Photo by Gabriel Tovar   How can educators create a welcoming, liberating, and transformative environment...
Mar 11, 2020 3:53:41 PM

How to Spot Growth in your Bridging Level English Learners

The name [Bridging level English learners] suggests that students are reaching an advanced level of profi...
Jul 19, 2019 9:00:00 AM

Who Are Your Developing Level Language Students?

Developing level students are in a unique position. They have reached competence with basic conversationa...
Jul 3, 2019 12:53:18 PM