Katherine Bryant is the Editor for Math and Sciences at Heinemann. In today’s post, Katherine describes her experience in a math classroom with Sue O’Connell and John SanGiovanni, while filming Putting Practices into Action, K–8, an online course for Heinemann’s Digital Campus. 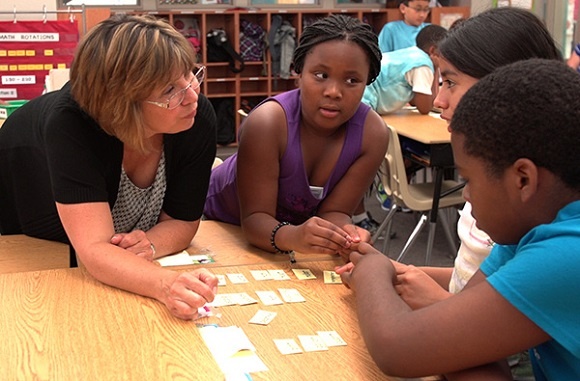 One of the things I like best about my job is getting to spend time in classrooms, watching educators and kids work and learn together. I inevitably learn a lot on those days too!

Last year, I had the privilege of spending one of those days watching Sue O’Connell and John SanGiovanni work with first-, third-, and fifth-grade students in a school near Baltimore. We were recording video for Sue’s new course on Heinemann’s Digital Campus, “Putting the Practices Into Action, K–8” (based on Sue and John’s book). The day’s goal was to capture some of Sue and John’s practical techniques for helping kids think, reason, and problem solve in the ways required by the Common Core Standards for Mathematical Practice, but for me the real pleasure came in watching the students as they tackled the math situations Sue and John put in front of them.

Take these first-graders, for instance. John challenged them to find 44 + 20, but he didn’t stop there. He asked them to share how they found their answer. I was impressed at how well the students, even at that young age, were able not only to find the answer, but to explain what they’d done.

Later in the day, we were in a fifth grade classroom as the students worked on several different problems, including a fraction multiplication scenario involving finding what fraction of a cake had both pink frosting and sprinkles. As I sat on one side of the room listening (and trying to stay out of camera range), I saw the camera crew spending a lot of time around one group of students. When I saw this next clip, I understood why. Listen in as these kids try to sort out how and why they got different answers.

While the kids didn’t resolve their difference during this discussion, it’s clear that they were interested in and paying attention to each other’s ideas. A bit later, during a full-class discussion, one of the students built on this conversation, asking about the discrepancy and clarifying for herself where she had made an error. These kids have had the chance to practice talking about and justifying their ideas, and their teachers have built a classroom culture where a conversation about different answers isn’t just accepted, but encouraged.

I know I was never asked to do anything like the kind of reasoning, explanation, and justification that these students were doing—maybe not even in high school, never mind in first grade! And I think the same is true for most of us. Helping students today get to a point where they can think and share their ideas this way can seem daunting, but I think one thing Sue does well in this course is show how a few simple moves and strategies, used consistently and thoughtfully, can help students develop these skills and habits of mind.

These kids have had the chance to practice talking about and justifying their ideas.

The fraction multiplication problem these students were working on, for example, was a fairly standard one found in many mathematics programs. The value came in how it was used: students weren’t expected to sit quietly and use one algorithm to solve it, but to find approaches that made sense to them, and to share and explain those approaches with one another. The classrooms I visited during these video sessions were noisy places, not silent rows of desks, and out of that noise came conceptual understanding and students who could authentically do mathematics.

I encourage you to check out Sue’s course for more of this great classroom video, along with strategies and techniques to help build this kind of mathematical thinking for all students.

Susan O’Connell is an author, national trainer, and the director of Quality Teacher Development, a network of resources and professional development for teachers of K–8 mathematics. Her Heinemann books include Putting the Practices into Action: Implementing the Common Core Standards for Mathematical Practice, K–8, and Now I Get It.

John SanGiovanni is a mathematics supervisor for the Howard County Public School System in Maryland. He is an adjunct instructor and frequent speaker at both regional and national conferences. His Heinemann books include Mastering the Basic Math Facts in Multiplication and Division and Putting the Practices into Action: Implementing the Common Core Standards for Mathematical Practice, K–8.